The Dart: McMillian has a job of compassion 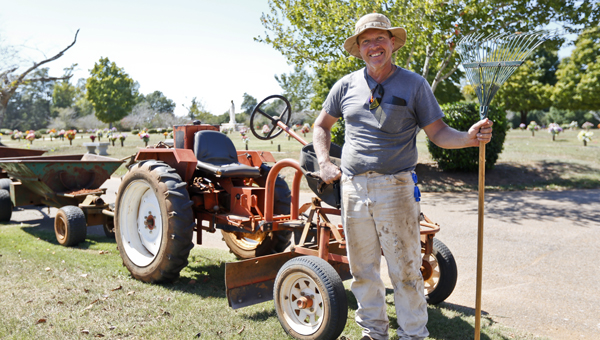 Digging graves isn’t the most glamorous occupation, but it’s still a job that has to be done.

Ross McMillian is a resident of Valley Grande and works as a gravedigger and groundskeeper at Pineview Memory Gardens. McMillian said his job allows him to sympathize with people and be compassionate with those who have lost a loved one.

“It’s an enriching job, because you get to talk to people, [a funeral] is a very bad time with a lot of people, and you get to show how much of a human being you can be,” he said.

McMillian moved back to Selma after his mom fell ill. When he moved back he had to find a job, and said that a preacher at a church he used to attend told him about the position.

“There’s a job for every person, and I like my job. I’m grateful to have a job here in Selma,” McMillian said. “I think I have lost a couple of dates because of [the job].”

Although he has had many different jobs in the past, he said that he likes his job and his boss.

“It’s a great company, and this is the best boss that I can ever remember having,” McMillian said.

As one of the only two people that work in the actual graveyard, he has multiple responsibilities.

“Mainly we take care of the grounds, we dig graves, and we set tombstones,” McMillian said. “Most of the time, we don’t have any time to sit down — we’re always busy.”

Summer months can be grueling for the crew with the heat and taking care of the grounds.

“We get a lot of overtime during the summer, we will spend four full days a week taking care of the yard. Every week we have to mow the yard,” McMillian said.

Even after two years, McMillian said it’s still no easier to see the families of the loved ones who have passed away.

“It’s very said when it’s a young person or an infant. You just don’t forget the parents. It can be pretty sad,” McMillian said. “I just hope these people can go on and not live in regret in the past.”