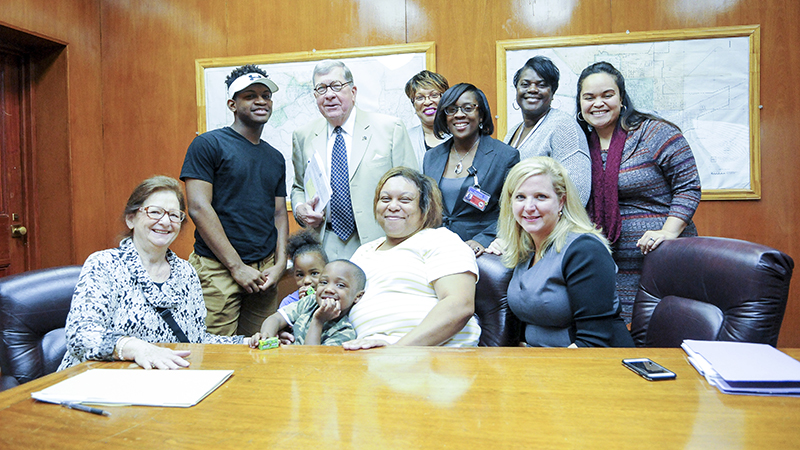 Janice Walker poses for a photo with her newly adopted children, Jossie and Josais, along with Chief Clerk of the Probate Office Suzanne Ingram, Justin Walker, attorney Gary Thompson, Theresa Walker, attorney Jana Garner and representatives from the Department of Human Resources.

Janice Walker has taken care of her foster children, Josais and Jossie, for nearly all their lives, and now she is officially their mother after successfully adopting them Tuesday morning.

Walker was all smiles at the Dallas County Probate Office early Tuesday morning, as Chief Clerk Suzanne Ingram presided over the adoption hearing.

“It’s very exciting. It’s been a long, long road, real long road,” she said before the hearing. “It’s not been hard, but it’s been long.”

In a matter of minutes, Walker was officially given approval to adopt Josais and Jossie.

“It was something that I never thought that I would do,” she said. “In my family, I am the first one to do something like this, so it is really exciting to do something different. More kids, I didn’t expect to have anymore, but I was blessed with two children that I didn’t have to have.”

“It’s not nothing different. It’s just one big happy family,“ she said. “My home has always been their permanent home, and that’s where they’ll always be.”

Walker said the adoption process seemed like it took long than it did, but having Josais and Jossie officially in the family was well worth it.

Even though Walker had to go through the official adoption process, she said it didn’t feel like an adoption because Josais and Jossie have already been a part of the family for so long.

“Sometimes you look at it and you don’t feel like [it’s adoption] because I’ve had them for so long. It’s really not an adoption process for me,” she said. “It just looks like I am changing their names. That’s what it feels like for me.”

Walker said her 15-year-old son, Justin, loves having two younger siblings, as well as the rest of the family.

“I don’t know if he likes it or if he loves it. He has somebody to play with all the time,” she said. “They are loving it. My sister, family, brother, they all love it.”

Jana Garner, who was the filing attorney for Walker, said it is a great feeling to help someone fulfill their dream of adopting children.

“There is something so satisfying about it. It is just a blessed event, and it is from beginning to end,” Garner said.

“It’s just a blessing to see children planted in this garden that they are going to thrive in for the rest of their life. It’s just a wonderful thing to see that and be a part of that and to facilitate that happening.”

Walker said she couldn’t wait to get Josais and Jossie back home after the hearing to celebrate with their grandmother.