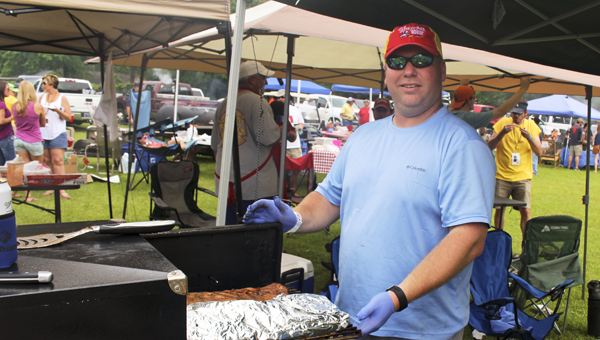 Bragging rights were on the line Saturday as about a dozen local teams competed in the fifth annual Rock ‘N’ Ribs benefit.

The annual event was held again at Lions Fair Park and is sponsored by the Blackbelt Benefit Group.

Teams competed in several categories, including best ribs and wings. Top prizes were to be announced later in the evening.

Each team was judged on the following: presentation, creativity, flavor, texture and the people’s choice.

Besides bragging rights, competitors say they enjoy the fellowship the friendly competition offers.

Calame said his team had four cooks and about eight total members representing the bank. In addition to ribs and wings, the Trustmark team was also cooking homemade onion rings and French fries for those who stopped by their tent to enjoy.

Clay Carmichael with Blackbelt Benefit Group said the event, now in its fifth year, couldn’t happen with the teams.

“We really thank the teams. The come out and buy all kinds of food. They spend hundreds of dollars to feed everyone,” Carmichael said.

The Blackbelt Benefit Group got the ribs from Mark’s Mart at cost, but team members brought lots of other fares to share with the crowds.

Admission this year was $20, which included all you could eat ribs and music as well as games, inflatables and a rock-climbing wall for the kids. Proceeds from the cook-off will go toward the Grow Selma and Mill Village Community Garden and Food Park. Look for winners in Tuesday’s edition.