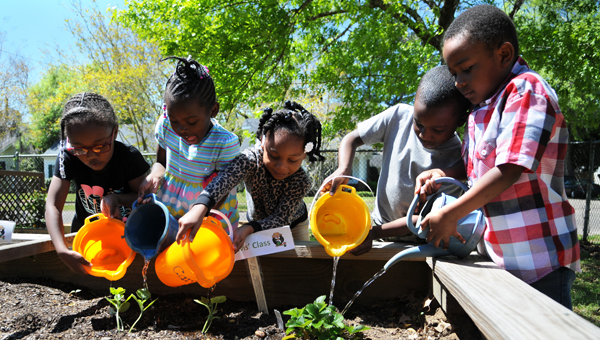 More children at Byrd First Class Early Learning Center will be able to experience hands-on learning of the plant cycle with a recent expansion of its school garden.

“Since we became a pre-k two years ago, we have been trying to enhance the playground,” said principal Dr. Carolyn Keasal. “It’s great for them to see the life cycle. That’s one of our goals in pre-k is to teach them about the plant cycle from seed to plant. So this really goes along with our curriculum so they can learn how plants grow.”

The school already had one raised garden plot, but it only had enough room for six classes.

“They did have a raised garden, back there, which we cleaned up and fixed up and used it for some classes but it was really small,” Keasal said.

On March 24, parents and Wake Tech College in North Carolina volunteers worked together to clear the grounds and to build two additional raised gardens.

The project was made possible with the help of Community Development Institute Head Start, the Dallas County Alabama Cooperative Extension System, Office of School Readiness and the city of Selma, according to Keasal.

She said gardening supplies such as a shovel, a rake, small plants and seeds were donated by the Alabama Cooperative Extension System.

Keasal said the children have been excited about the new garden pots and have enjoyed planting the various fruits, vegetables and flowers.

Keasal said the classes are given time to visit the garden every day to water the plants and pick weeds. She said last year the children were able to harvest and eat the watermelon.

Five-year-old Gabriel Vasser said he has learned a lot about seeds and plants.

While looking at a blooming strawberry plant, he said, “We got to wait till its red, then you can eat it.”