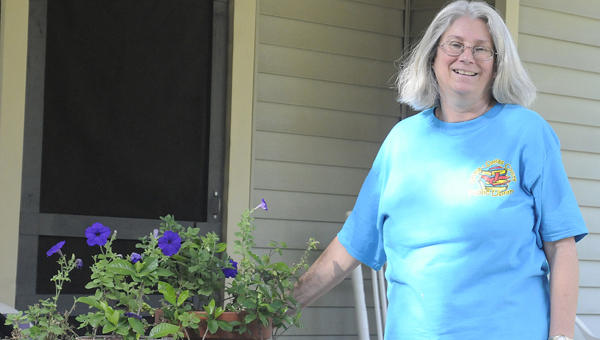 When The Dart landed on Lamar Avenue Wednesday, it found PH Miller and her two dogs enjoying a Selma afternoon on her front porch.

The dogs, a Catahoula named Myles and a Jack Russell terrier named Wishbone, are great stories in their own right. Myles is trained to defend Miller on command and Wishbone, who walks a little funny, is a new addition to the family that Miller added Wednesday.

“He is considered home security,” Miller said of Myles. “Everyone should have a Catahoula in my opinion.”

But, Miller, a retired criminal justice professional, is the real story. She’s traveled all over the United States and all over the world for her career. At different times, she’s taught classes and jumped fences in armored clothing. She’s been everywhere and has plenty of stories to tell.

“I tell people I used to be what they call a top cop,” Miller said. “When there were problems, they brought me in, but then I got a degree in psychology and started putting together programs of a psychological process.”

She came to Selma from California three years ago to help start an anti-recidivism program, and she knew then it would be her final job before retirement.

When the program didn’t work out, she decided she liked Selma and its potential enough to stick around. She found an old house on Lamar Street, the “Kayser House,” which was barely visible at all because of the weeds and trees that had grown up around it.

“I was staying temporarily in that little house right there,” Miller said pointing to a house on the other side of the street. “I could see there was something over here full of bushes. [Once I bought it], the first six weeks all I did was chainsaw work.”

Although the owner of the house originally wanted to rent it, Miller talked him into selling it and she now spends most of her free time working on the house.

The Kayser family, which is now the Barton family, has sent Miller original pictures of the house and Miller is doing her best to restore the home to exactly what it was around 100 years ago.

The pictures she received from the family, and her vision for the house, were almost identical.

“Everything I wanted to do was exactly what the pictures showed and I had never seen the house before,” Miller said.

Although Myles and Wishbone aren’t expected to be much help, Miller’s long-term goal is to return the house to its former glory.

Statistics show that one in six men will have prostate cancer, but a Birmingham-based health foundation is offering a 10-minute... read more