The Dart: Home is where the handiwork is 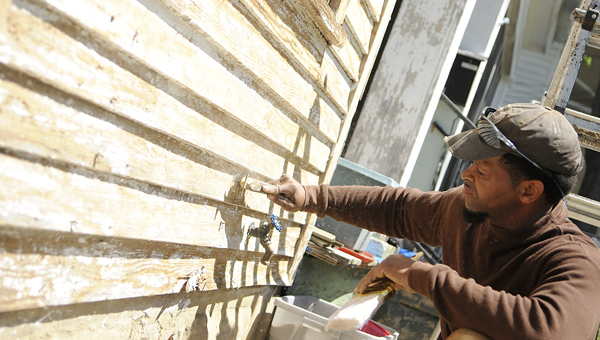 For one Orrville resident, handiwork is an important part of life.

Though it pays bills, Robert Sheffield said handiwork is a labor that he loves.

When The Dart landed on Lamar Avenue Wednesday, it found Sheffield and two others repairing a 100-year-old house.

Sheffield is a 1989 Keith High alumnus and Orrville native. Following graduation, he moved around for jobs, traveling as far as New Orleans and North Carolina. Now, Sheffield is back home, in Dallas County. He said regardless of where he traveled, Orrville is home.

“Orrville just has that feel to it,” he said. “You can just feel when you’re welcome in a certain place. It’s not like I couldn’t move somewhere else, but Orrville just feels like home.”

Wednesday, Sheffield was joined by his cousin Jeff Cochran, though they aren’t quite sure exactly how they are related. Both are Keith High School alumni and Orrville natives.

Cochran, who graduated from Keith in 2000, said the school has always had a top-notch basketball program. But when he was in school, Cochran said the school was slightly better at football.

The group included a third member — Birmingham resident Ladeldrick Henderson. Henderson isn’t often in Selma. When he is in Selma, it’s usually for work, Henderson said.

“The finished product is what makes it fun for me,” he said.

The group started working on the Lamar Avenue house one week ago. Sheffield said recent, heavy rain slowed work, which includes repainting the entire exterior and replacing the house’s roof.

Sheffield said he wasn’t sure exactly how many gallons of paint the house’s exterior might require, but when it’s done, he will know.

“It’s just like a cake,” he said. “You just know when it’s done and looks good. The flavor just has to be there.”

Tasha Tice has been named the Times-Journal’s audience development manager, focusing on building the reach and audience of all of... read more