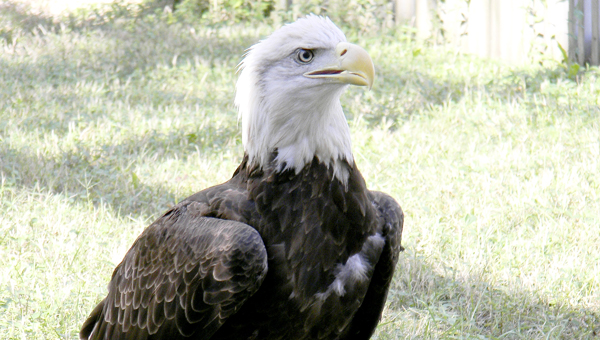 This bald eagle, which has been treated by Auburn’s Raptor Center, will be released at Paul M. Grist State Park Saturday, Nov. 12. -- Special photo

One of Dallas County’s most unique residents will return home next weekend to once again take flight.

A bald eagle that was injured in the Beloit area has been rehabilitated at the Auburn University Raptor Center and is now strong enough to return to the wild.

Since December 2010, local veterinarian George Wood said the eagle has gone through a series of surgeries and other forms of therapy to recover from the injuries, which are believed to have been caused by a wire.

The bird, Wood said, was originally discovered on the side of the road by a concerned motorist.

“We had a lady come in and said she had found a bird on the side of the road and she didn’t know what it was,” he said. “She described it and showed me a picture and it was no doubt we had a bald eagle involved.”

Two employees of the Selma Animal Hospital were sent to the Beloit area along with the game warden where they captured the eagle. Wood said they performed some preliminary first aid before sending the bird to the Raptor Center. The eagle, Wood said, entered the same program used for the same raptors that fly around Jordan-Hare Stadium on football Saturdays.

Since the eagle was taken to Auburn, Wood said they periodically check in to see how it is progressing. A recent check in revealed the eagle was ready to return to its home.

“We periodically talk to them and try to keep up with it, and they called me this past week and told me they were planning to release it,” he said. “They asked for some suggestions and I told them the area it came from.”

Wood praised the work of Auburn University and the Raptor Center for its efforts to rehabilitate a bird that would have likely died if left in the wild.

“It’s something they do that there is not a paying client out there,” he said. “Whatever they make comes off donations and whatever grants they can get through the national park service.”

The eagle will be released at a public launch in the Beloit area along the Alabama River on Nov. 12. Wood said a time for the release will be announced at a later date.

The story, Wood said, is especially unique because many people don’t realize there are bald eagles in Dallas County.

A group of eagles was released near Camden several years ago to set up colonies for nesting. However, the eagles are rarely seen.

“It’s just a great story for this area, because I’ll bet most people in the area don’t realize we have bald eagles in the area,” Wood said.