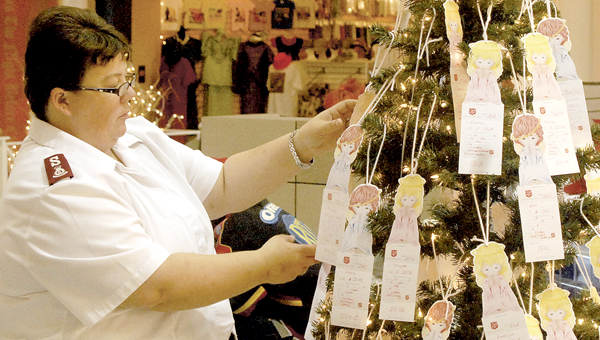 Major Tonya Roberts sets up the Salvation Army’s annual Angel Tree in the Selma Mall last year. Salvation Army officials are continuing to finalize the list of those families — and children — who will be helped by this year’s program.

Though angelic beings make their home in the heavens, this holiday season you can get an angel of your own by adopting a child from the Salvation Army’s annual Angel Tree.

Nearly 160 families have already signed up for assistance during the agency’s signups earlier this month, but Major Tonya Roberts said the increased public interest could warrant another day for more families to participate.

“We have 500 children … last year we had 350 families,” Roberts said. “We’re hoping to look at next week to do an additional day. We’re trying the radio stations to do a radio-thon to get people to sponsor an angel.”

Roberts and her team is hoping to have names of each angel out soon.

“We haven’t put the tree out yet, hopefully by the end of next week we’ll have angel tags out … it’s a process,” Roberts said. “We want to make sure every child has something …”

That “something,” Roberts said, includes at least one outfit and a toy for every child.

“If people want to bring gifts, dolls are good for girls and board games and remote control cars are good for boys,” Roberts said. “We don’t do games for game systems or bikes. No desktop or laptop computers. We’re asking you to spend at least $50 on your angel.”

Roberts said it’s important to bring gifts in early, saying all gifts must be received by the agency no later than Dec. 9 to ensure all children have a gift.

“If we don’t have enough by Dec. 9, we’ll have to buy more gifts and that’s money taken away from our general operating funds throughout the year,” Roberts said. “The summertime is our hardest time, money is gone by the summer.”

Those interested in adopting a family can do so by calling the Salvation Army office at 872-1646.

Roberts said the agency is in need of the community’s support this holiday season.

“We need their support and we appreciate their support,” Roberts said. “We’re excited about the upcoming Christmas season.”

Jimmy Robitaille tees off at Valley Grande Golf Course Wednesday. Robitaille was one of 100 golfers who participated in the... read more