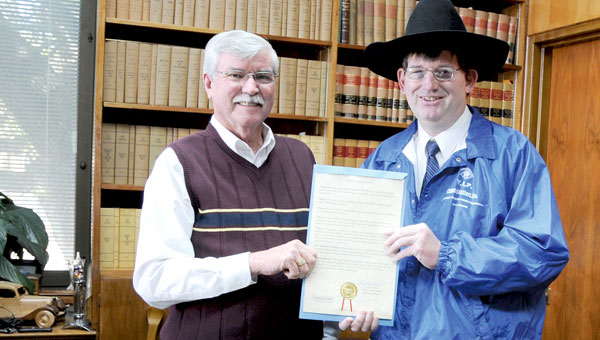 Selma resident and V.I.P. president William Bowman said it is important to educate people on the importance of regular vision screenings and the needs of the visually impaired.

“We promote glaucoma awareness and also educate the community on what it is like to be visually impaired,” he said. “We are encouraging people to go out and have their vision checked and observe the warning signs.”

Warning signs of glaucoma include cloudy or haloed vision, nausea or headaches, excessive blinking, light sensitivity, crossed eyes, one eye becoming larger than the other, excessive tearing and decreased vision.

Bowman, who has suffered from glaucoma since he was 9-years-old, said he understands first-hand the importance of vision screenings.

‘Glaucoma is the leading form of blindness,” he said. “I’ve been fortunate to have good doctors who were able to save some of my vision, so I know how important it is to see your eye doctor regularly.”

Through his conversations with Bowman, Ballard said he has learned some of the challenges that visually impaired people face, especially on Election Day.

“Because of some of the conversations I’ve had with William, we now have special voting machines for the visually impaired at all 21 of our polling places,” Ballard said.

Because of his personal experiences, Bowman said he feels it is his duty to raise awareness about glaucoma and the challenges of being visually impaired.

“I feel like God uses me as a vehicle to spread his message,” he said. “I know if I hadn’t gone to the eye doctor, I wouldn’t have been able to maintain my vision.”