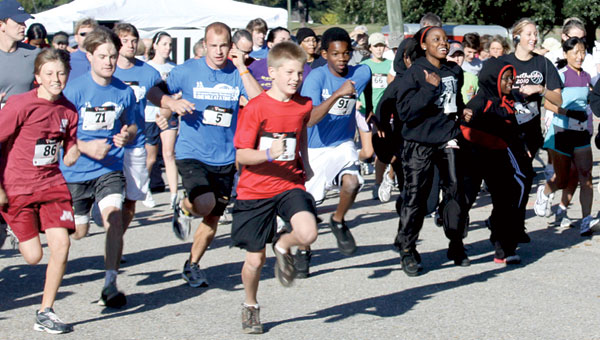 More than 120 runners participated in Integrity Worldwide’s inaugural 5K run in late October. All of the proceeds are going to the Christian program’s efforts in Kenya. -- Submitted

Alan Hicks Jr. really didn’t know what to expect with the first one. He and others had hoped to break even.

“We had really hoped to break even on the first one and build something for down the road,” Hicks said. “But we brought in right at $10,000 that will go to continue our work in Kenya.”

More than 120 runners took to the 5K route that would make its way from Bloch Park to Dallas Avenue and down to Lauderdale Street, Alabama Avenue, Selma Avenue and back through Old Live Oak Cemetery.

Hicks said the success of the first event has led organizers to think of growing the event into possibly adding a spring run.

“It was a lot of work. But it was well worth it,” Hicks said. “The weather was really great — the first cool day of the season — and everyone seemed to have a great time.”

Proceeds from the event helped continue the Christian missionary program’s project of completing a medical mission center in Meto, Kenya.

“We want to be able to take doctors and dentists and be able to have medical care in this little community,” Hicks said in an article promoting the run. “The first step is having a place for them to stay, so we want to build a mission center.”

Integrity Worldwide has also brought a water well and library to the Kenyan community.

“Our goal would be to have a dentist office there and a small medical clinic so we could have a doctor there to treat people,” Hicks said. “So, you’re not only doing [the race] because it’s fun, but you’re doing it for an amazing cause.”

Integrity Worldwide was founded in 2006 and has a partnership with villages in Kenya and Uganda. The program has already brought a 75,000-liter well (which converts to about 19,813 gallons) and a state-of-the-art library to Meto.

The library brought the community modern conveniences such as running water and toilets in the bathrooms to a computer lab and conference room. Pipes run from the well to the library for the running water. The library also runs via solar power.

For more information on the Selma-based Integrity Worldwide, log on to www.integrityworldwide.com.

No decision yet on teen suspect