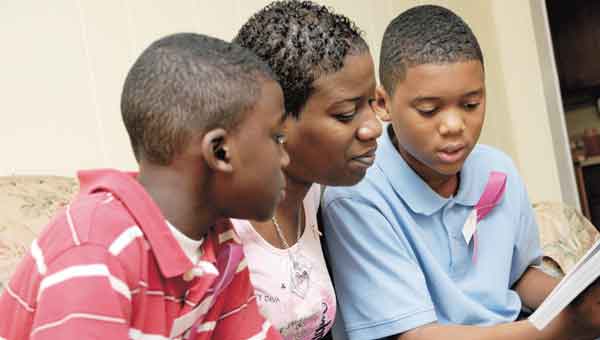 Editor’s note: This is the second profile in a month-long series focusing on breast cancer survivors.

Both Nikki Brown and her husband, Demond, wanted to be strong for each other.

Alone, each felt scared of the future.

Together, husband and wife faced fear head-on and beat the most difficult obstacle of their lives — Nikki Brown’s breast cancer diagnosis.

Her husband found the lump in 2007, while the two were wrestling one day, but she did not get it checked out until the lump grew so large it could be seen through her skin.

“I noticed it wouldn’t move but it was almost protruding through my skin,” Nikki Brown said.

When doctors left her in an examining room for 45 minutes while they tested the biopsy of the lump, Brown began to worry. Until this point, she thought it was probably a benign lump.

Doctors offered her two choices: remove the lump or remove the entire breast to keep the cancer from spreading.

“I didn’t have to think about that,” Nikki Brown said. “I told her to remove the whole breast. So, right now I have no breast on the right side. It has been completely removed.”

After removing her breast, she underwent chemotherapy every two weeks for six months until the cancer was completely gone.

Opting to not do reconstructive surgery, she now uses a silicone breast insert, which she places under her clothing.

Her aggressive chemotherapy caused her hair to fall out after one treatment.

Devastated that her hair fell out in large patches, Nikki Brown turned to her husband for support.

“He just looked at me and said, don’t worry about it, I’m a barber,” Nikki Brown said.

And on the days when she felt unattractive, he was always there to boost her spirits.

“I never looked at her as being ugly,” Demond Brown said. “Even though her skin changed color, she still had the same facial features.”

His wife’s hands, feet and tongue turned a dark shade from the chemotherapy treatments.

“No matter what, I’m going to love her,” Demond said. “I’m going to always think she’s sexy, because she is.”

But for as confident as Demond appeared to his wife, he too had moments when the uncertainty was too much for him to bear.

“There were days I would go in the bathroom to cry because I didn’t know what the outcome was going to be,” Demond Brown said. “She was strong through the whole ordeal. I can’t say the same about myself.”

Guiding his wife through her treatments was all too familiar for him because when he was 18 his mother had breast cancer.

“You appreciate somebody more when they’re strong and come through something like this,” Demond Brown said.

The Browns cherish every day they spend together and are thankful Nikki is a survivor for three years now.

She urges every man and woman to have a doctor screen them for breast cancer early and often.

“It doesn’t matter what age you are, you can be inflicted with this disease,” she said. “I just hope that one they do have a cure.”

Market Day: Something for all