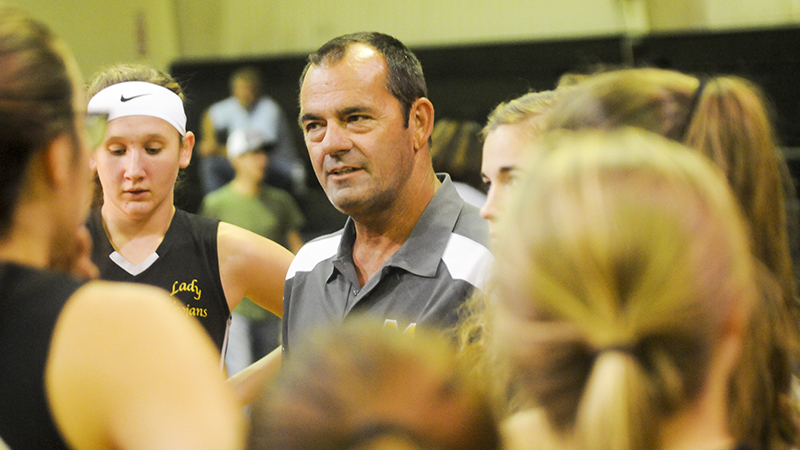 Meadowview head coach Tim Burton addresses his team during a timeout. The Trojans made it to the ACEA state playoffs but were eliminated after two games.

The Meadowview Christian Trojans volleyball team went to the ACEA state playoffs in Oxford this past Friday but lost in their first two games and were eliminated from the tournament.

“I told [the girls] to be proud of their season,” Meadowview head coach Tim Burton said. “They finished second in their Area and made it to the state playoffs. A lot of teams didn’t make it there, so hold your heads up high and be proud. I was proud of them.”

Meadowview has made it to the state tournament each year they’ve been a part of the ACEA. One year, they finished as high as third in the state, according to Burton.

The Trojans lost their first match to Tabernacle and the second to New Life.

“The girls played well,” Burton said. “They got a little tight as the games got on. Both games were really close.”

Even though their season has come to an end, Burton said that he was proud of how his team played and progressed throughout the year. The team had a 7-3 record in the RegionB Area1 standings.

“I had a bunch of girls that picked up their game from losing starters last year, and they’ve come a long way,” Burton said. “I’m looking forward to most of them playing again next year.”

This year, the Trojans are only losing three seniors: Alicia Deavers, Nikita Miller and Sara Tepper. According to Burton, the majority of his team will be returning, and he’s confident they’ll be able to step up for next season.

Now that the season is over, Burton is sending three of his players to the Marion Academy all-star exhibition game on Saturday, Oct. 28 in Marion. Miller, Tepper and Erin McIntyre will represent the Trojans this weekend.

“They were three of my starters and two were seniors, and I felt like they deserved a chance to go,” Burton said. “They were excited about going.”