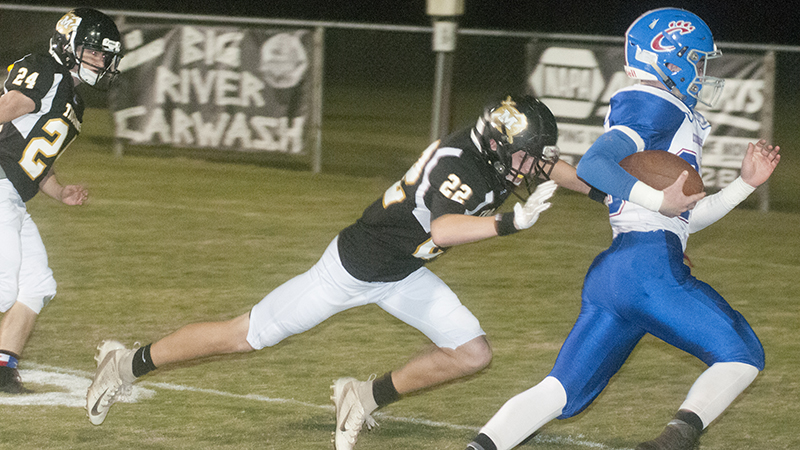 The Meadowview Christian Trojans ended their first 11-man season and homecoming night with a loss to Crenshaw 54-6.

The Crenshaw Christian Cougars (9-1) is a play-off team, whose only loss came to No. 7 Pike Liberal Arts. The Cougars are averaging 31 points per game on offense and allow less than 10 points per game to its opponents.

The return to the AISA has been a bumpy road for the Trojans (0-9) football program, but they’ve made it to the end of the season.

The Cougars kept the scoreboard active early with four touchdowns in the first quarter.

The first touchdown for Crenshaw was on a punt return with 9:06 left in the first.

Crenshaw also was able to scored on defense after returning a fumble recovery for a touchdown with 4:48 left in the first and the score separated more at 21-0.

The Cougars scored again on the ground with 1:23 left in the first quarter to make the score 27-0.

The rushing attack continued in the second quarter with a 70-yard run with 9:08 left in the half making the score 33-0 after a no-good PAT.

The Cougars ended the second quarter with another touchdown with 1:34 left making the score 40-0.

After halftime, the Cougars caught a 5-yard pass with 5:04 left in the third making the score 47-0. That was the only score of the third period.

The fourth quarter saw one touchdown each for the teams with Crenshaw making a 15-yard run with 11:21 left and the score at 54-0.

The Trojans were able to get on the score board with one minute left in the game after a 9-yard pass from quarterback Tayton Molyneux to Aaron Little.

The Trojans went for two, but were unable to break through the Cougar defense.

“We lose four seniors,” said head coach Bob Taylor. “I can’t thank them enough for trying to get our program back up to 11-man football, and in May of this year, we were playing 6-man football.

“They went from playing six to eight to 11,” said Taylor. “They’ve had a rough go, and it’s been a rough year. We had to go back to teaching basic football. For them to learn how to do things the right way and they’re young. We played some high ranked teams this year. They continue to learn, and now it’s just about getting in the weightroom and getting stronger.”

Taylor said there’s no going back from 11-man football.

At the end of the presentation, 2017 Homecoming Queen Hannah Phillips presented the crown to Alyssa Veerhoff.