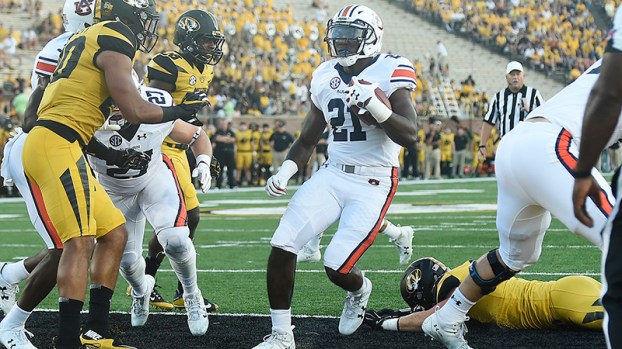 COLUMBIA, Mo. (AP) — Kerryon Johnson rushed for a career-high five touchdowns and No. 15 Auburn ended its recent offensive struggles in a 51-14 victory over Missouri on Saturday night.

Johnson, who had missed the previous two games with a hamstring injury, finished with 48 yards rushing on 18 carries and fell one short of Carnell Williams’ school record of six rushing touchdowns in a game.

Jarrett Stidham added 218 yards passing and a touchdown while completing 13 of 17 passes for Auburn (3-1, 1-0 Southeastern Conference). Auburn’s Carlton Davis also had an interception, one of four Missouri (1-3, 0-2) turnovers in the game.

Drew Lock finished 23-of-39 passing for 216 yards and a pair of touchdowns for Missouri, which allowed its most points since a 63-37 loss to Tennessee last season.

AUBURN: The Tigers’ offense entered the game looking like anything but a Gus Malzahn-coached team, having allowed 11 sacks in a loss to Clemson and committing five turnovers in last week’s win over Mercer. Aided by Johnson’s return, Auburn returned to its high-scoring form from the start — highlighted by completions of 58 and 46 yards by Stidham in the first half.

MISSOURI: Missouri’s season-long struggles with defense continued on Saturday night, with the Tigers allowing 482 yards of total offense by Auburn. Missouri entered the game 103rd in the country and last in the SEC in total defense, and its problems showed in particular in the first half — when Auburn scored 31 points and scored on all four of its red zone chances.

AUBURN: The Tigers play their first game against an SEC West Division opponent when they host No. 17 Mississippi State next week.

MISSOURI: After four straight home games to open the season, Missouri is off next week before traveling to Kentucky on Oct. 7.