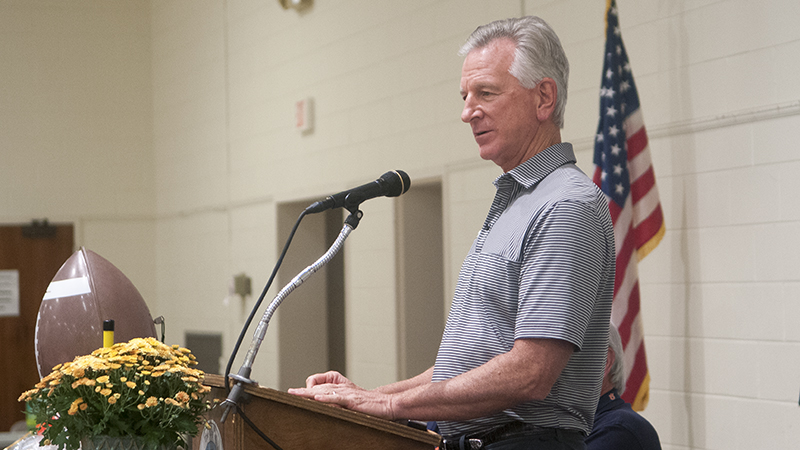 In a room full of college football fans, former Auburn head coach Tommy Tuberville blended in like he was a member of the Selma QB Club himself at the club’s meeting on Monday night at the Carl C. Morgan Convention Center.

“We were delighted to have coach Tuberville,” QB Club finance chairman Forrest Hatfield said. “He’s been a friend of the club, and he’s been here a number of times. He’s always entertaining, and one of the most informative speakers we’ll probably hear this year.”

The QB Club is split almost evenly between Auburn and Alabama fans, but the Auburn fans were excited to have one of their former coaches come speak to them.

Even before dinner started, fans were shaking hands and chatting with Tuberville. Some he already knew and could call by name.

“I know most of these guys and they know me,” Tuberville said. “Alabama fans and Auburn fans, it’s all good fun. I’ve been looking forward to coming back. I haven’t been back here in probably five or six years, so it’s good to come back and see old friends.”

While at Auburn, he only had two losing seasons (1999 and 2008). He finished first in the SEC West division five times, won the SEC championship in 2004 and was 7-3 against rival Alabama.

His primary message of the evening, however, was about the future of football. The player safety concerns and the risk of concussions have already had an impact on youth participation in football.

Tuberville advocates for and even travels to teach coaches how to properly instruct their players on how to tackle. The improvement in helmet safety, changes to the rules on hits and other safety precautions are attempts to make the game safer, but Tuberville said the game as fans know it as today will look different if player safety continues to be an issue.

“We’ve got to make the game safer and figure out ways to do that,” he said. “Sooner or later, we’re going to end up not having a lot of people playing this sport.”

The former coach gave his input on the SEC and the future of college football to the QB Club audience members. He told the audience how the SEC has become even more competitive.

Tuberville is going to the Auburn vs. LSU game on. Saturday, and called it a defining moment game. The LSU game was the early season test when he was coaching the Tigers, and that fact still remains.

He also plans on going to the Iron Bowl, but just to tailgate. He said he wasn’t going into Bryant-Denny Stadium, which he jokingly called Tuberville-West.

Once Tuberville finished his speech, the QB Club members came with question after question to pick his mind even further.

Tuberville remembers the 2004 team as one of the most un-selfish and easiest teams he’s had to coach through his coaching career. He even had a player he recruited from Selma High on that team in wide receiver Ben Obomanu.

“I’ve got fond memories of Ben and what he’s done,” Tuberville said. “He played in the NFL for the Seattle Seahawks, and now he’s a lawyer and probably will be the governor one day.”

Tuberville answered each question from the audience and remained afterwards to shake hands and greet several more fans.

The Selma QB Club’s next meeting will be on Monday, Sept. 24 and Sherman Williams will be the guest speaker. The next meeting is also father-son or daughter night. Admission is $15 per child for the next meeting.