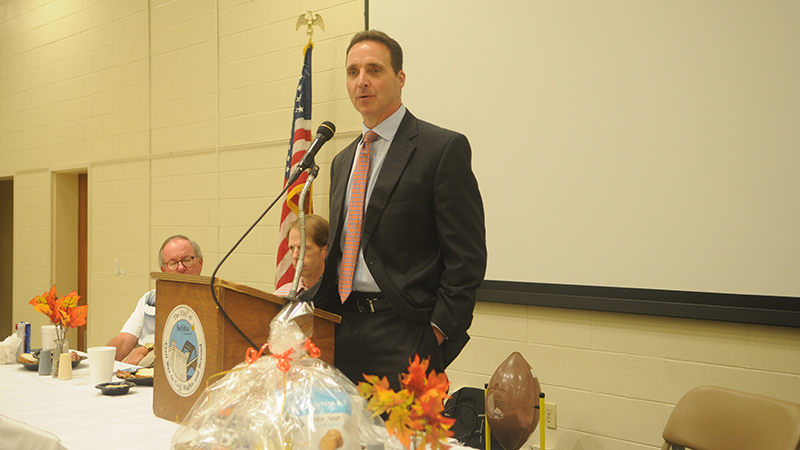 The Selma QB Club’s fourth meeting of the year marked the halfway point on the 2018 schedule. Former Auburn University and Philadelphia Eagles center Ben Tamburello was the featured speaker on Monday afternoon at the Carl C. Morgan Convention Center.

“It was such an honor, with all the great speakers the club has had, just to be invited,” Tamburello said. “The great thing about being in a mixed crowd like this is that they both respect each other. I think most Auburn fans respect Alabama for who they are, and right now they’re the gold standard in football. But Auburn has had that same place, be it a national championship or competing for it, so I think it goes back and forth. There’s always that underlying respect from each side that makes it such a special rivalry.”

The QB Club is almost evenly split between Auburn and Alabama fans, so a former Auburn player was a solid choice to follow former Crimson Tide running back Sherman Williams, who spoke at the previous meeting.

Tamburello, who now works in real estate sales in Birmingham, brought some family and friends to Selma with him as he shared his football story with the club. With all the familiar faces in the crowd, he said it ‘feels like a home crowd to me.”

Tamburello’s path from high-school athlete to NFL center is filled with memories from both on and off the field, but he shared several of his favorites with the Selma QB Club.

Tamburello, a Birmingham native, grew up an Alabama fan and a Paul “Bear” Bryant fan. He graduated from Shades Valley High School with no scholarship offers, but his coach believed he could continue playing if he went to a small school on Sweetwater, Tennessee called Tennessee Military Institute (TMI).

The second chance gave Tamburello a chance to keep playing football without burning his eligibility. He got his first offer from Kentucky, before other schools began recruiting him.

He recalled the one night he heard his name called for the shared dormitory phone line. When he was told it was Bear Bryant, he thought it was a prank.

But then he heard coach Bryant’s indistinguishable voice over the phone and instantly recognized who he was keeping waiting on the phone.

He remembers coach Bryant trying to persuade him to join his favorite school growing up with the line, “I want to see you in a crimson jersey next fall.”

Despite the personal call from coach Bryant, it was Auburn’s head coach Pat Dye that convinced Tamburello to choose the Tigers over the Crimson Tide.

Tamburello played for Auburn from 1983-1986 as an offensive lineman. He was an unanimous All-American, won the SEC Lineman of the Year award and named a team captain in his senior year (1986).

He played with Bo Jackson, Randy Campbell, Al Del Greco and other Auburn legends during his time playing for the Tigers.

Tamburello has his own little-known story about Jackson. During the time Auburn football players were on campus for practice before school had started back, Tamburello spent his down time playing pool in the recreation room at the Sewell Hall dormitory. Backup quarterback Mike Mann was the king of the ping-pong table, according to Tamburello.

He had never seen Jackson play ping-pong before, and could tell by the way that he held the paddle instead of the handle that Jackson might be new to the game as well.

The matchup got everyone’s attention in the rec room as Jackson and Mann traded hits.

When it was all said and done, Jackson, like he usually did, found a way to win and walked out the room having bested his teammate at his own game.

Tamburello, like everyone else who witnessed Jackson’s greatness from afar, still speaks in awe at the talent Jackson had. He told the QB Club that it didn’t matter how big or how good someone was, Jackson would be able to beat them.

He saw opposing defensive players faces drop when they looked over to see Jackson jogging back onto the field for the next play.

Tamburello shared four keys that he picked up from his football playing career. He told the QB Club that setting goals, paying attention to the little things, expecting opportunities and taking advantage of them, and playing big were factors that helped him through his collegiate and professional career.

He shared his favorite football memory of being the captain for Auburn at the Iron Bowl in 1986. He called heads for the coin toss, won the toss and helped the Tigers defeat Alabama 21-17.

His proudest moment was watching his son Ben Tamburello III play in his senior year on the offensive line for Navy against Army.

“I’m a fan now. I’m not an expert,” Tamburello said. “I like to look back at my experiences as a player and know there’s a lot of pressure on those guys. Yeah, they’re supposed to win, but they sometimes make mistakes, fumble throw interceptions and miss blocks. I like to communicate that to the crowd, so people won’t be so hard on college football players. They’re doing their best and there’s a lot to what they do.”

The QB Club’s next meeting is on Monday, Oct. 15 at the Carl C. Morgan Convention Center, and the featured speaker will be former Alabama quarterback Jake Coker.