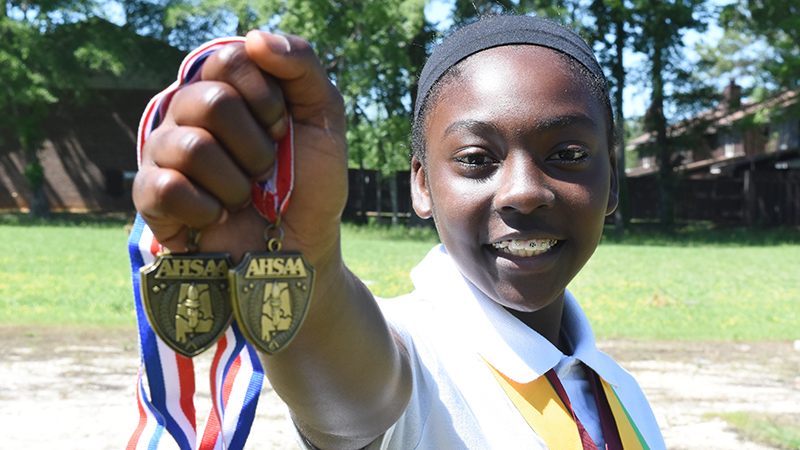 When Ellwood Christian seventh grader Rashni Walker walked to the starting line on Saturday, she didn’t look to her side and see several juniors and seniors, who were likely much taller and stronger, set to outrun her.

“I was just thinking that I’ve got to get across the finish line to do what I want to do and to beat the record,” Walker said, talking of the state record, which she fell short of.

Out of the 42 different girls who qualified for state in those two races, only four of them were in seventh grade.

The rest were older than Walker, including twelve seniors or juniors.

Their age didn’t help against Walker, who runs track all year long in the Walker Track Club. She finished the 100-meter hurdles in a time of 15.89 seconds, just ahead of twelfth grader Katherine Brandon from Whiteburg Christian Academy. She won the 300-meter hurdles with a time of 47.37 seconds.

Even as the top qualifier in both events, Walker said she made sure not to enter the events overconfident.

“When you’re overconfident, my mom and my dad always tell me, that’s how you lose,” Walker said.

Outside of the track, she loves to sing and draw. She often sings at church and said big crowds don’t bother her at all.

“God has blessed her with so many gifts, and I tell her you don’t have to do just one,” said her father, Jeffery Walker, who also serves as her track coach.

There’s nothing she loves more than animals. Just a few weeks ago, she found a homeless cat at Memorial Stadium and took it to the vet to try to get it nursed back to health.

Sadly, the cat didn’t make it, but it’s only made her want to help animals more. She plans to go to college to be a veterinarian.

“I love animals and the way I see it on TV that all the animals in the world are being hunted and they are being poached, they are being killed for their skin, their tusks, their coats, their fur. I see that you aren’t trying to overpopulate the world with this one creature, but you can’t go overkilling it,” Walker said. “There are already so many animals that have gone extinct over poaching.”

Walker can easily list animals that are starting to go extinct or have already been wiped out completely.

She loves track, but she said helping animals is the “most important thing in her life.”

She wants to do it all, including being a vet, grooming animals, and providing them dental care.

If she keeps running, all of her college could be paid for. After all, as a seventh grader, she’s already one of the best hurdle runners in the state.