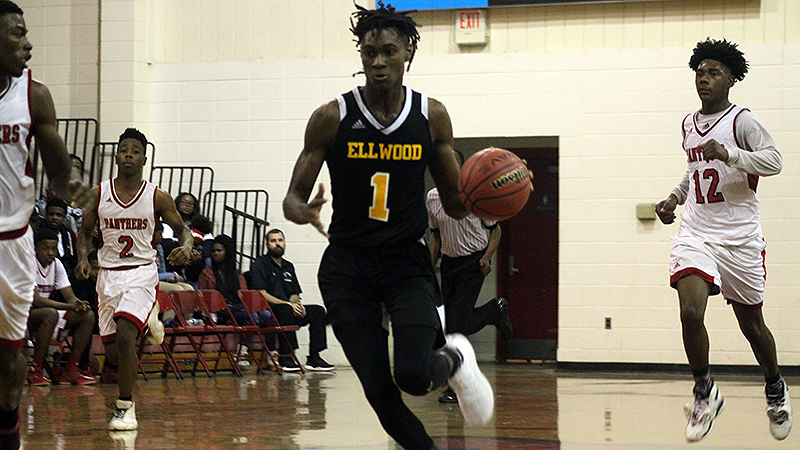 Ellwood's Justin Buford led the team in scoring with 22 baskets.

On Friday night, Southside High School faced off against Ellwood Christian Academy on their home court and suffered a 50-48 defeat.

Justin Buford led the Eagles in scoring with 22 baskets evenly split between the halves. Joseph Mahone followed him in scoring with 10 baskets, all of which were scored in the second half.

The Panthers led in the first half on the back of Keshawn Williams, who put up 22 of the Panthers’ 48 baskets. Williams was followed by Malik Johnson who put up 14 for the Panthers.

Williams scored 17 baskets in the first half but was largely shut out by the Eagles’ defense in the second.

“I felt great about the effort,” said Eagles Head Coach Willie Shears. “We had some highs and lows, but the effort was there.”

Though Ellwood eked out a win, Shears hopes the team can improve before next Friday’s game against Robert E. Lee High School in Montgomery.

The Lady Panthers dominated the Lady Eagles Friday night in a 48 – 15 victory to open their season.

Christina Watts stood out during the game with 22 baskets, while teammate Tamereya Snow put up another 10.

“For our first game, we do have a lot of room for improvement,” said Head Coach Rand Smith. “I was proud of their effort. We preach effort here.”

Smith noted that the Lady Panthers will be hard at work Monday preparing for their upcoming game against Wilcox Central High School.

Game of the Week: Morgan and Tuscaloosa Academy play for top spot