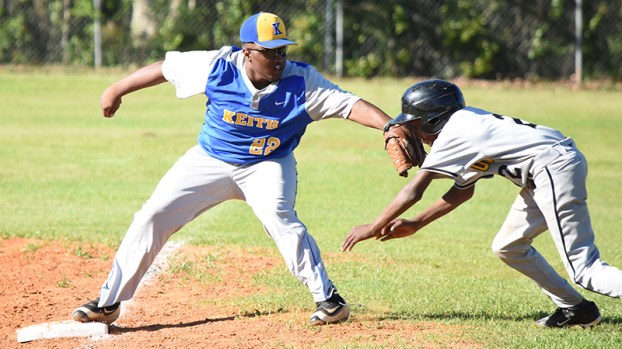 Keith comes back from 5-0 down to stun Ellwood

The first three innings of Friday night’s game against Ellwood Christian couldn’t have gone much worse for Keith. Ellwood pitcher A.D. Tate had kept the Bears’ bats quiet and the Eagles had jumped out to a 5-0 lead.

All of the momentum changed with one swing of the bat.  Denzell Benjamin hit an inside the park home run to lead off the fourth inning to start the Bears rally. Keith didn’t cool down the rest of the game as the Bears stunned their rivals 13-7 in front of a large baseball crowd at Selma University.

“I’m proud of my guys. It’s a great feeling. We hadn’t played baseball since my tenth grade, going into my junior year, I think 91 or 92, and I want to get the kids excited about Keith baseball,” said Keith coach Anthony Lumpkin. “I want to get the younger guys into it because everybody’s not a basketball player, everybody’s not a football player. Let’s give them something to do.”

Benjamin’s homer was a unique one, since it didn’t threaten the fence and was probably in the air only a second or two. It was hit hard in the infield, took a weird bounce and rolled to the right outfield wall. By the time the Eagles threw the ball into the infield, Benjamin was crossing home plate, where he was congratulated by a group of his teammates.

“If he shows up, we have a 95 percent chance to win a ball game,” said Keith coach Anthony Lumpkin of Benjamin. “He can crush a ball. He likes to swing for the fences and I just have to settle him down and say just hit the ball.”

“I think the shift occurred when we missed the infield line drive,” Crum said. “I think that was a momentum changer.”

Nigel Pettway hit an infield single, bringing in two more runs for the Bears as part of a seven run inning. Pettway and Ledell Jackson scored on errors, tying the game. LaDarius Pasley and Kendarius Perry also scored on errors and Keith led for the first time at 7-5.

Ellwood answered back in the bottom of the inning, thanks to an inside the park home run by A.D. Tate. Tate hit the ball to deep left field and sped around the bases to pull the Eagles within one.  Ellwood tied the game on an error filled play. A single by Katavious Olds and several throwing and fielding errors on the same play led to Olds scoring to tie the game 7-7.

Keith answered again with four runs in the top of the fifth, highlighted by a RBI single by Pettway. The other three Bears’ scores came on wild pitches and Keith led 11-7. With the game on the line, Keith pitcher Jim Pettway shut down the Eagles.

He forced five of the final six Ellwood batters to ground out or strikeout and the one player who did get on base, Duantrey Franklin, was thrown out at third thanks to a little trickery. After Jim Pettway attempted to throw out Franklin at third, Keith third baseman Tyrone Lumpkin acted like he had thrown the ball back to Pettway. Instead, he had it in his hand and tagged Franklin after he took a step off the base.

“It’s something that they’ve been trying to put in the game. I told them if you do it and it works, then it works,” Lumpkin said.

Crum said he saw it coming, but the Bears pulled it off so well that it didn’t matter.

Keith tacked on two more insurance runs in the sixth, both on wild pitches. Ellwood Christian’s A.D. Tate pitched all six innings for the Eagles. Keith started with Sentrone Winters at pitcher, but brought Pettway in during the third inning.

The game between the two rivals resulted in a larger than normal crowd for a baseball game, something Crum noticed early on.

“The only regret is I didn’t charge admission,” Crum said with a laugh. “This is the most folks I’ve seen at a baseball game since we’ve been playing.”

Morgan Academy and Tuscaloosa Academy have battled it out for the last few Alabama Independent School Association tennis championships. On... read more