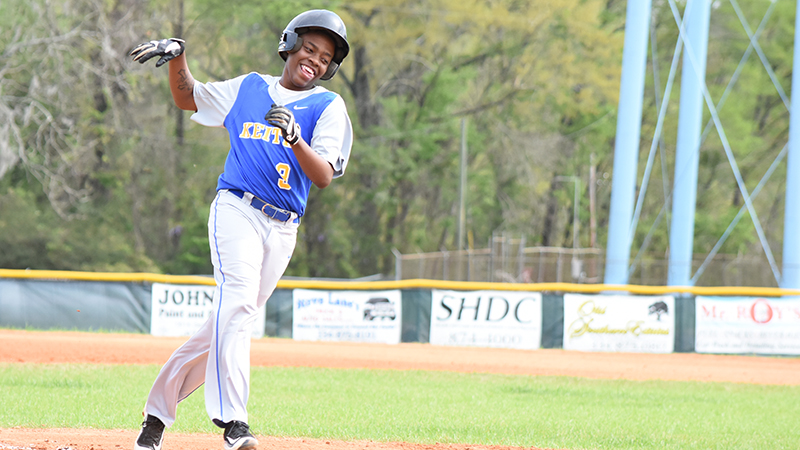 Keith’s Jarvis Williams smiles as he touches home plate during Monday’s win over Autaugaville. The Bears scored 12 runs in the second inning and topped the Eagles 23-6. --Daniel Evans

Keith’s baseball team earned its first on the field win of the year win Monday in a lopsided 23-6 victory over Autaugaville at Bloch Park.

The win was technically the Bears’ second of the year — to go along with a forfeit by Central Hayneville — but it was an important one for the school. Keith (2-2) restarted its baseball program last year and won one game, but even that victory was nothing like Monday’s, where the Bears controlled the game start to finish.

“It’s about building a program. That’s what we’re trying to do.” said Keith coach Anthony Lumpkin. “We are known for basketball, but we are trying to throw [baseball] into the mix. We want our guys to be just as excited about baseball as they are about basketball.”

Keith scored five runs in the first inning, highlighted by a single by Anthony Lumpkin that brought home Denzell Benjamin.

After the Eagles scored one run in the top of the second, Keith scored 12 in the bottom of the inning to take a 17-1 lead.

Benjamin’s triple scored Jim Pettway and La’Darius Pasley to make the score 8-1. Keith scored most of its other runs on wild pitches and fielding errors.

The only exceptions were a single by Nigel Pettway and a double by Jarvis Williams.

Keith’s Sentrone Winters pitched the first two innings and gave up only one run. He was pulled in the third for Anthony Lumpkin, who held Autaugaville to five runs the next two innings.

“He started off pretty good. We’re just trying to get him comfortable on the mound,” coach Lumpkin said of Winters.

Jim Pettway came in during the fourth inning to close it out. He struck out two of the four batters he faced to close the door on any comeback attempt.

“He’s one of our captains and when we call on him, he’s there,” Lumpkin said of Pettway.

Everybody got to play for the Bears on Monday as Keith continues to build its baseball program. The Bears are scheduled to play Tuesday at Central Hayneville and Ellwood Christian on Friday.