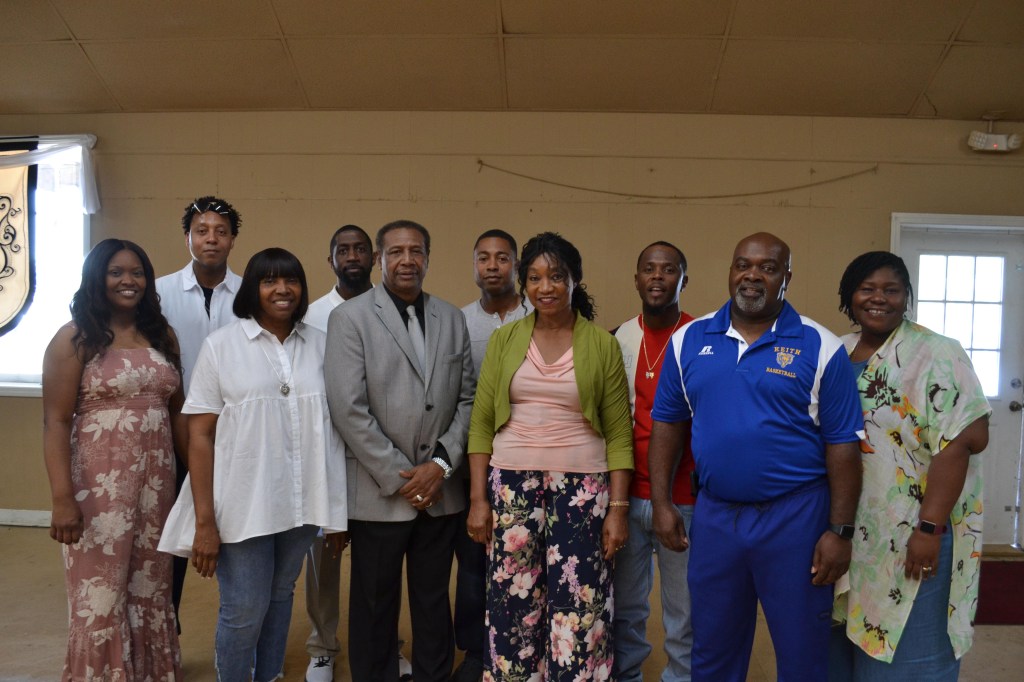 Players from Keith High School’s 1997-98 boys’ basketball team, winners of the Class 2A state championship, honored several coaches and administrators who played a role in their successes that season and beyond during a reception held Saturday afternoon at 2821 Citizens Parkway.

Kendall Thomas, a point guard who now owns his own business, credited the coaches and administrators for the influence they had in his life and said he continues to use to tools and resources they provided him in his youth.

“It was a collaborative effort between Coach (Joseph) Pettway starting us off as unit getting us all together and moving forward to Coach (Howard) Smiley where we played junior varsity,” Thomas said. “Then, we moved over to Coach Norris where we played varsity. But also, it goes into the classroom where we had our English teacher Zella (Haywood-Ford) and our current superintendent Hattie Shelton all played a vital role into us accomplishing all that we did in high school and afterward in our personal lives.”

Thomas played alongside William Harris, Michael Harris and James Anderson from their time at Hazen Harrell Middle School all the way to the championship season, where they defeated Tanner 70-66 in the 2A title game to finish their senior season with a 26-6 record.

The Bears trailed the Rattlers by 19 points at halftime, but Norris said he was unfazed as he addressed the team during the intermission.

Norris said the team overcame a bit of adversity when some players were kicked off the team, but those cuts opened up room for others to step up to the challenge.

“It’s next man up,” Norris said. “You cannot win when you’ve got fellas that don’t want to play because the only thing that’s going to do is try to mess up the other players. The thing is you have to weed out those that don’t want to play. All we were looking for was players that were willing to win, players that had the heart and wanted to win. These guys were hungry.”

He added the support he and his team received from the community helped make the title run possible.

“Everybody was on the same page, and we had good support from the parents,” he said. “The guys were willing to work, do the things they were supposed to do, stay out of trouble, stay focused and play hard.”

Shelton said the coaching staff treated the players as if they were their own children and they would actively check the grades of each player every two weeks to make sure they were staying on track in the classroom.

“They didn’t have a choice but to succeed, basically, because if you’re going to be out here bouncing this basketball, you’re also going to be in that classroom doing what you’re supposed to be doing,” she said. “We had very few behavior problems, even though they acted as if they were always in trouble, they really were not. They were a great group of kids to work with.”

When she found out about the event, Shelton said she was shocked, but excited to be included.

“Just the fact that they considered us a part of their winning was an honor for me,” Shelton said.

Shelton and Haywood-Ford both said the efforts put forth by their former students speaks to their character.

“We wouldn’t have a job without our children, and to see who they’ve become and how they’ve moved forward in their careers is humbling to me, just to play a small part in that role of them becoming who they are today,” Ford said. “It’s a humbling experience to be invited to the table because they didn’t have to reach back.”

Michael Harris said Shelton and Haywood-Ford played a big part of their lives as student-activities and the support they showed them continues to manifest itself in their adult lives.

“The kind of dedication they’ve instilled in us, that’s what we give to our families, to our jobs, to our careers,” he said. “What we’re doing now, that started back when we were 16-17 years old.”

Smiley said she appreciated the players for honoring her late husband, who passed away Dec. 22, 1999.

“He was very proud of his team, and he was proud of Keith High School,” she said. “I think that was his first love. He didn’t start off wanting to coach, but somehow, he fell in love with it.

“With this particular team, he was very excited over it because he saw so much potential with them. He said he had two good guards and he had a forward that would always be waiting on the guards to get the ball to him. I think deep down, he always wanted to win a championship, and they did … I know he’s very proud of what they’ve done and he was very proud of them.”