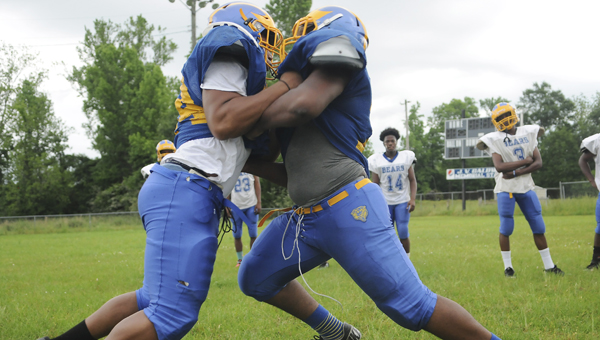 The Keith Bears held their first day of spring football practice Monday for about an hour before lightning forced the practice to end early. Keith head coach Harry Crum has some talent returning, headlined by junior running back Domonique Jones, but the Bears have to fill some holes left by departing seniors. — Justin Fedich

As the Keith Bears open a chapter into next season with the start of football practice, the headline will be the return of junior running back Domonique Sanders, who was a second-team all-state selection in class 1A last season.

But with only one offensive lineman coming back from last year’s Keith roster, head coach Harry Crum is concerned about finding some replacements to open up holes for Jones.

Keith held its first spring football practice of the season Monday, getting about an hour of practice in before lightning forced the team off the field earlier than the coaching staff would’ve liked. Although the team has a good amount of players returning, there will be plenty of shuffling and moving around positions to fill holes in key places.

Without senior quarterback Brian Crum next season, Harry said it will be a two-man race to replace him. Freshman Mark Young and eighth grader Jared Edwards both have limited experience playing quarterback. Young got a few reps last season, while Edwards started for the junior varsity team.

Harry said both will have to get used to the speed of the game, but he likes both players’ abilities to be Keith’s next leader on offense.

“They’re smart kids. They love the game and they’re coachable,” Harry said. “Those are three qualities I look for in a quarterback.”

Keith also needs to remake its offensive line after four starters, including senior Morris Collins, won’t return to the team next season. Joshua Thomas, Lamar Crumpton and Keyon Lewis also won’t be back, leaving Terrence Underwood as the Bears’ lone returning starter on the offensive line.

“I’ve got to put a line together,” Harry said. “We’ve got some candidates.”

Harry said Jamarcus Harris, Nigil Pettway and Keanu Bennett will all see time on the offensive line during spring practice.

Thomas and Collins also played pivotal roles on the defensive line, but Harry said what the team lacks in size it can make up for in speed. Jones should see time at defensive end in addition to his role as the team’s lead tailback.

Harry is confident Jones can handle the added responsibility this season.

“He looks better than last year just in his quickness and power,” Harry said.

For now, Harry is working on getting his less experienced players more comfortable in expanded roles. On Monday, the practice was designed on teaching players proper tackling techniques, as Harry was quick to make sure players kept their heads up.

“It’s giving me some opportunities for some younger guys who don’t really know the system, to give them their reps,” Harry said.

Keith’s spring game is Thursday, May 12 at Holt High School.