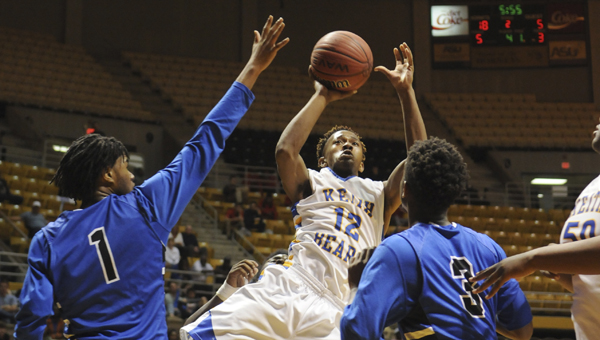 The veteran Bears held Jefferson Christian to only one made shot in the first half and outrebounded the Eagles 53-20. Jefferson Christian was making the school’s first ever appearance in the regional round of the playoffs and the inexperience was a key factor.

“I told my four big guys — Jimmie, Morris, Dalven and Dominic — I want every rebound, not some of them,” said Keith coach Tommy Tisdale. “This time of the year if you let a loose ball go, you may not have another loose ball to go get.”

The Bears seemed to take that to heart as they attacked the rim all night, whether they had the ball in their hands or not.

Dalven Johnson and Morris Collins led the way for Keith with 10 rebounds apiece, but Jimmie Powell had eight and Mark Young chipped in seven more.

That effort kept Jefferson Christian from getting second looks on a night where the Eagles struggled to get any shots to fall. Keith had Dontavius Thomas guard Phillip Lester, the leading scorer for Jefferson, and he held him to 15 points in the game.

Lester was 1-for-9 from the field in the first half but that was the only shot the Eagles made in the first 16 minutes.

“Dontavius did a good job of turning him in the first half,” Tisdale said. “The shots he normally makes, he got a few of them, but now he’s tired, they were contested and we rebounded real well.”

John Pettway scored 27 points on an efficient 13-for-18 from the field. He also added seven assists and four rebounds.

Pettway was looking to pass early and he found Collins for easy layups several times in the first half.  Collins had 10 points and nine rebounds in the first half and finished with 12 points for the game. He said he knew the team had to rebound better than it did against Maplesville earlier this week.

“I felt like if I didn’t get a rebound and I watched the ball go in, it affects my team,” Collins said.

Keith scored the first 10 points of the game and led 37-8 at halftime.

At that point, Jefferson Christian was shooting just 5 percent from the field. The Eagles ended the game 7-for-41.

“It was just an off night,” Lester said.

In the fourth quarter, Pettway threw an alley oop to Eric Smiley to put Keith ahead 60-22.

The Bears stole the ball on the next Eagles’ possession and Pettway raced down the floor for another slam dunk.

Those plays put the final touches on a complete effort by the Bears. Tisdale said after missing out on the playoffs last year, Keith is hungry.

Keith will play Cornerstone School in the Central Regional Championship Tuesday at 8:15 p.m.