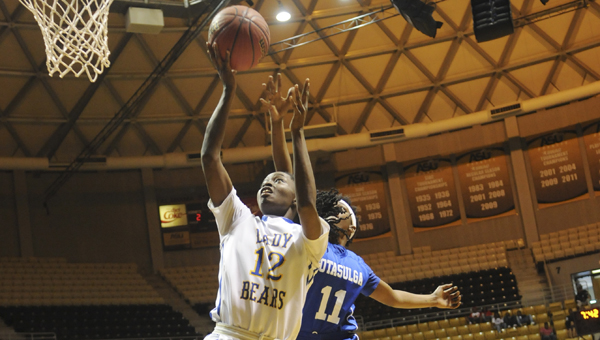 MONTGOMERY — Keith opened up a big lead early and coasted to a 50-30 win over Notasulga Thursday in a Central Regional semifinal game at Alabama State University.

The Bears forced 16 turnovers by the Blue Devils and got big days from their top three scorers. Harriet Winchester scored 20 points and also had eight rebounds and six assists. Zykia Pettway flirted with a double-double, scoring 14 points and adding nine rebounds, and Shatavia Moore had 13 points on 6-of-11 shooting.

“Words can’t be put together to explain how talented [they are] and how hard they work,” said Keith head coach Cecil Williams of his team. “Even when we have slow spots on offense, our defense never slacks.”

That showed on Thursday, as Keith held Notasulga to just four points in the opening quarter.

Offensively, Pettway got a lot of looks early on, as the Bears tried to establish an inside presence.

In the second quarter, Pettway stole the ball and found Moore for another layup. Shortly after, Winchester knocked down a one-handed jump shot to make it 19-8.

On the next Keith possession, Ambreya Snow was fouled and went to the free throw line. She missed the second attempt, but followed the miss, grabbed the rebound and laid the ball off the backboard to complete a three-point possession.

“That’s just hustle,” Williams said of the play. “That’s something you can’t teach. They’ve got to have that in their heart and everybody here shows that.”

Keith led 28-12 at halftime and continued to stretch its lead in the second half. Winchester made two jumpers in the second half and Pettway made a turnaround shot, something Williams joked he’s been waiting to see for six years.

“It’s something we’ve been working on since my seventh grade year,” Pettway said. “I’m just now putting it into play.”

Ambreya Snow also played 28 minutes for the Bears and helped lock down Alexandria James, the top scorer from Notasulga. Snow had five rebounds, three points and two steals. Keith outrebounded the Blue Devils 33-26. Notasulga struggled shooting, but the Bears made 19 of 39 shots.

“We made a few mistakes on rotating our defense but the main things that killed us is experience. We’re young,” said Notasulga coach Maurice Williams.

Keith moves on to play Loachapoka Tuesday at 6:30 p.m. in the Central Regional final. It’ll be the fourth straight year the Bears have played the Indians in Montgomery.

Without top scorers in lineup, Selma loses to John Carroll