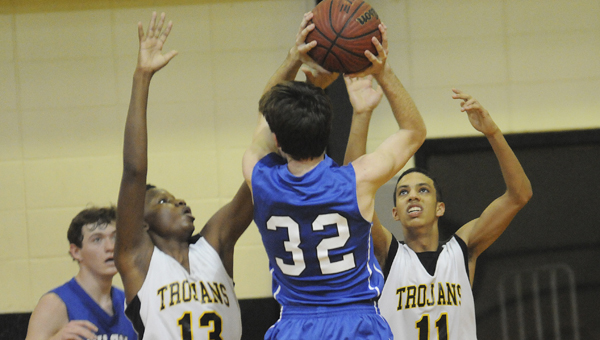 The first time Wilcox Academy and Meadowview Christian played this season, the Wildcats won in a rout. On Saturday, the Trojans returned the favor.

Meadowview used a press defense for the first time this season and Wilcox had no answer for it. The Trojans forced turnover after turnover to take a 19-point lead in the second quarter and coasted to a 75-45 win.

“Best game of the year. The press worked good,” said Meadowview Christian coach John Robert Morton. “There were still a few breakdowns in it but we don’t ever do it. The last time we played Wilcox we noticed they struggle at the point guard position so I decided to put it in.”

One other difference between the first meeting between the teams was that Jevar McGuire played this time around. Jevar was injured for the first game, but scored 21 points Saturday..

The Trojans made 11 3-pointers, with five of those coming from Kaymon McGuire. Kaymon scored 17 points in the game and Justin McGuire had another 16 points.

Between the three of them, the McGuire brothers combined for 54 of Meadowview’s points, but plenty of others chipped in as well.

Sam Dabit had 10 points, including two 3-pointers, Jeremy Lee had five points and Cameron Gorenflo knocked down a late three to get on the board.

“It’s leaps and bounds from the first time we played them,” Morton said. “We’ve made some changes, not only to our defense but to our entire offense. We literally balled it up and threw it away after the Wilcox game last time. We started working on something new, and it has really taken off.”

Meadowview led 38-19 in the second quarter before a 7-0 run by Wilcox before the half. All of those points were scored by the Wildcats’ Cory Stallings, who finished the game with 19 points.

The Trojans quickly took back control in the third quarter with threes by Kaymon and Dabit to push the advantage to 24 going into the final quarter.

The Meadowview Christian Trojans struggled to get much offense going Saturday in an early afternoon loss to Wilcox Academy.

The Trojans made only five field goals in a 50-14 loss and four of those came in the first half.

“We missed 16 layups we counted under the goal and we missed all of our free throws I think,” said Meadowview bead coach Lebo Jones. “We just didn’t shoot the ball well.”

The Trojans made five free throws, but missed the majority of their chances at the charity stripe during the game. Mallory Freine led Meadowview in scoring with five points.