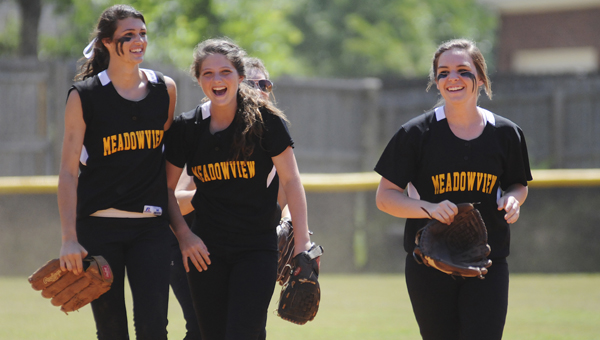 MILLBROOK — The New Life Christian softball team remains a thorn in the side for Meadowview Christian.

For the third time in four meetings this year, New Life defeated the Trojans 13-6 Friday in the second round of the Alabama Christian Athletic Association state tournament, which was played at New Life Christian.

Despite the loss, the Trojans will play again Saturday at 10 a.m. in an elimination game against Tuscaloosa Christian. They’ll need three wins to claim the state championship.

Aided by a three-run home run by Shelby Boswell that cleared the left field fence, Meadowview took an early 5-1 lead on New Life and looked like a team ready to ride the momentum gained from a comeback win over Tabernacle Christian earlier Friday.

Then, New Life did what New Life has done so many times this year, including multiple times to the Trojans.

The Eagles scored two runs in the third to chip away at the lead and then exploded in the fourth. New Life scored five in the fourth to take a commanding 9-5 lead and the Eagles advantage only swelled from there.

“I talked to the scorebook keeper and asked him how many errors we made because I really didn’t feel like we’d made that many errors,” said Meadowview Christian coach Cherie Grimes. “I felt like New Life had a bunch of hits and that’s really what he told me. We made three errors, and they had six runs off those three errors. We just failed to answer back with the bat.”

The last time the Trojans played New Life, the region B regular season championship was on the line. Meadowview led 5-0 in that one before eight errors gave the Eagles all the help they’d need for a rally and eventually a blowout win.

During Friday’s game more was on the line. Both teams knew going in the winner would need only one more victory to claim the state championship, while the loser would have to win three games Saturday.

Despite the loss, Grimes was proud of her team and the way they managed a long day. Meadowview played the day’s first game, which started at 10 a.m. and was still on the field at 8 p.m. against New Life.

“They really showed true grit today and determination and really trying to work together as a team and trying to hold each other’s head up,” Grimes said. “They really did a great job and they are building every day. Unfortunately, we are running out of time for them to keep building on that.”

The Trojans took the early lead with a single by Boswell that scored two runs to give Meadowview a 2-0 lead.

Kallie Nuckols answered with a double off the top of the center field wall that scored a run to pull New Life within 2-1. Boswell’s home run made it 5-1 and gave the Trojans a moment to celebrate and some hope that they might be able to break through against the Eagles again.

New Life scored on singles by Nuckols and Raegan Romney to pull within 5-4 int he bottom of the third but really starting pulling away in the fourth. Julianne Wilkes’ single brought home two to make it 6-5 Eagles and sparked a big inning that saw New Life take a four-run lead.

The Eagles stretched the lead in the sixth to 13-5. Christina Dabit’s sacrifice fly brought in one run in the seventh for Meadowview but the Trojans couldn’t get a rally going.

It’s an understatement to say Friday’s Alabama Christian Athletic Association state tournament opener didn’t go the way the Meadowview Christian softball had planned. The Trojans had to use three pitchers and trailed most of the way. Yet, when it mattered most Meadowview came through in the clutch.

Down 5-3 entering the bottom of the sixth inning, the Trojans broke the game wide open with an eight-run inning to take command on their way to a 13-5 win.

“All the hard work has paid off, “ said Meadowview Christian head coach Cherie Grimes. “I’m just so proud of them that they kept high spirits in the game and didn’t get down and had fun with it. “

Tabernacle pitcher Catherine Thompson, who had been on top of her game throughout, appeared to wear down in the sixth and Meadowview took control. After trailing throughout, Meadowview took its first lead of the game on a 2-RBI triple by Maggie Tipton. Christina Dabit kept the momentum going on a single over the outstretched glove of the Tabernacle third basemen to add two more runs.

Claudia Kendrick put the finishing touches on the inning with a double that made it 10-5. Seconds later she slid face first into home plate to score on a wild pitch to give Meadowview an 11-5 lead. The Trojans added two more in the seventh.in hand.

Meadowview moved on to play New Life  Christian in the winner’s bracket championship. game, but lost 13-6.