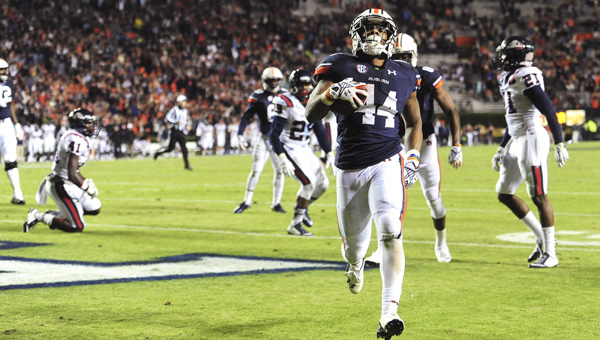 AUBURN, Ala. (AP) — Cameron Artis-Payne ran for 129 yards and a touchdown, quarterback Nick Marshall passed for 171 yards and a score and No. 16 Auburn snapped a two-game skid with a 31-7 victory over Samford on Saturday night.

Auburn (8-3) used the game against an FCS opponent to tune up for next week’s Iron Bowl showdown at No. 2 Alabama.

The Tigers, who upset Alabama last year before narrowly losing the national title game to Florida State, needed a morale boost after dropping from third to 14th in the College Football Playoff rankings with consecutive losses to Texas A&M and Georgia.

Artis-Payne, the Southeastern Conference’s leading rusher, has rushed for 100-plus yards eight times this season. He averaged 5.4 yards on 24 attempts.

The Bulldogs (7-4) had a chance to cut the lead to seven early in the third quarter, but Wade Handrahan missed a 34-yard field-goal attempt wide left.

Auburn quickly went 10 plays, 80 yards to make it 24-7 when Marshall threw into the left flats, where Corey Grant caught the pass to score an easy 13-yard touchdown.

The Tigers’ offense, coming off its worst performance of coach Gus Malzahn’s 24-game tenure, was in a deep funk early with three punts, an interception and 36 total yards on its first four possessions.

Marshall, though, regained his composure with a three-play scoring drive that included a 49-yard deep pass to Sammie Coates and Quan Bray’s 23-yard touchdown run to force a 7-all tie.

Marshall completed 11 of 18 passes, but he ran for a season-worst minus-8 yards on 11 attempts.

Tigers defensive tackle Montravius Adams made three big plays in the first half, stopping Jeremiaha Gates for no gain to force a punt and chasing down quarterback Michael Eubank from behind for a 12-yard sack on third down that set up the Tigers’ second score, a 29-yard field goal by Daniel Carlson that made it 10-7.

On Samford’s last possession of the first half, Adams pressured Eubank into an inaccurate pass on third down, and Auburn went ahead 17-7 six plays later on Artis-Payne’s 7-yard TD run.

Samford was stout in the game’s first quarter and a half. Bulldogs defensive end Brandon Wilkinson sacked Marshall to force Auburn to punt on its opening possession, and cornerback James Bradberry stopped the Tigers’ second drive by intercepting Marshall on a deep pass to Coates.

Samford went ahead 7-0 midway through the second. Auburn blitzed two men off the right side, but Eubank avoided the pressure to hit halfback Tony Philpot for a 7-yard TD.

Bray became the first Auburn player to score a touchdown in the same season on a punt return, a catch and a run.

Auburn improved to 27-0-1 against Samford.