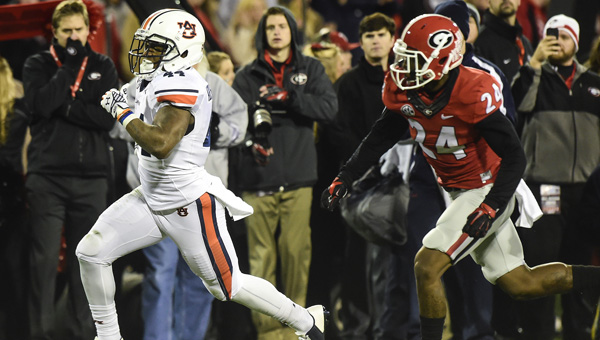 Cameron Artis-Payne runs for Auburn’s only score Saturday against Georgia in Athens.

ATHENS, Ga. (AP) — Nick Chubb shared the spotlight in Todd Gurley’s return, with both backs rushing for more than 100 yards in No. 16 Georgia’s 34-7 victory over ninth-ranked Auburn on Saturday night.

Georgia (8-2, 6-2, No. 15 CFP) dominated the latest edition in Deep South’s oldest rivalry, handing the Tigers (7-3, 4-3, No. 9 CFP) their second straight loss and finishing off any hopes they had of repeating as Southeastern Conference champions.

Gurley returned to Georgia’s backfield after serving a four-game suspension for taking more than $3,000 for autographs. And, boy, what a splash he made the first time he touched the ball, returning a kickoff 105 yards to the end zone after Auburn scored on its opening possession for a 7-0 lead.

The play didn’t count, however, wiped out by a holding penalty on Ryne Rankin.

Everything else pretty much went Georgia’s way. Chubb broke off a 9-yard touchdown run that gave the Bulldogs the lead for good midway through the second quarter. Gurley strolled in for a 3-yard touchdown that stretched the margin to 24-7 in the third quarter.

Chubb finished off the stunningly easy victory with an 11-yard touchdown run, capping a 98-yard drive after Amarlo Herrara picked off a fourth-down pass from Nick Marshall in Auburn’s last gasp.

Chubb rushed for 144 yards on 19 carries and went over 1,000 yards for the season. Gurley carried 29 times for 138 yards, though he hobbled off the field in the fourth quarter after taking a shot to his left knee.

He watched the rest of the game from a training table, the knee iced down. The extent of his injury was not immediately known.

Not to be overlooked was Georgia’s defense, which turned in a brilliant performance. Two weeks after giving up more than 400 yards rushing in an upset loss to Florida, the Bulldogs limited Marshall and Auburn’s fast-paced offense to its lowest-scoring performance in Gus Malzahn’s two years as coach.

The Bulldogs finished off their conference schedule and headed to the locker room to await the result of Missouri’s game at Texas A&M. An Aggies win would give Georgia the SEC East title.

Malcolm Mitchell hauled in a 7-yard pass for Georgia’s opening touchdown, after Auburn marched down the field with ease the first time it had the ball.

After converting three straight times on third down, the Tigers went ahead on Cameron Artis Payne’s 26-yard scoring run.

That was about it for the Tigers, who seemed to be feeling the effects of an upset loss to Texas A&M the previous week. Auburn was averaging more than 38 points a game and had not scored less than 20 since Malzahn took over.

Marshall completed 11 of 23 passes for 112 yards, and rushed for only 41 yards. The Tigers were held to 292 yards and turned it over three times.