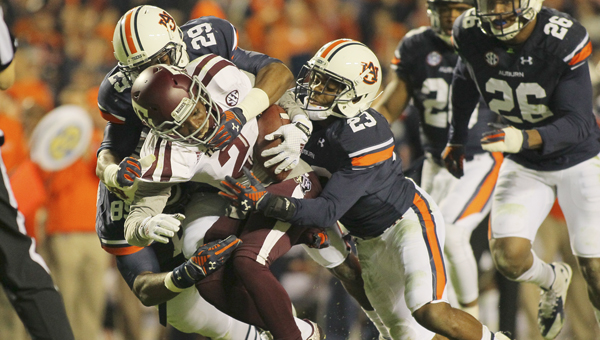 AUBURN (AP) — Twice the ball didn’t bounce Auburn’s way like it has so often.

In a 41-38 upset on Saturday, Texas A&M pulled off some of the late-game magic that the third-ranked Tigers have made their trademark.

Freshman Kyle Allen threw four touchdown passes in the first half and the Aggies recovered two late fumbles in a game that likely ended the Tigers’ playoff hopes.

“It hurts. It hurts our team,” Auburn coach Gus Malzahn said. “We had goals and dreams and we didn’t get it done.”

The Aggies (7-3, 3-3 Southeastern Conference), who came in as 23-point underdogs, wound up dancing on the sideline — and on Auburn’s postseason hopes.

“These past two weeks, no one really believed in us, but I feel like we always do our best when no one believes in us,” Texas A&M offensive lineman Mike Matthews said.

The Tigers (7-2, 4-2, No. 3 CFP) twice appeared to be driving toward a go-ahead touchdown before coughing it up on plays that never really got going. First, Julien Obioha won a scramble for the ball at the 2 after Nick Marshall and Cameron Artis-Payne got tangled up in the backfield.

“It was a poor exchange, it’s something that never really happens,” said Artis-Payne, who rushed for 221 yards and two touchdowns.

Marshall said Artis-Payne had come up with the ball first. Obioha was more concerned with who had it last.

“A lot of stuff happens at the bottom of a pile. I’m not going to say exactly who had possession of it,” he said. “But when it is all said and done I ended up with the ball and we had possession, so yes I did get the fumble.”

The Aggies couldn’t get away from their goal line before punting, and Trey Williams just managed to push the ball out of the end zone to avoid a safety on third down.

Then, the Tigers drove inside the 30 for one more shot. Marshall appeared to be still checking to a different play when center Reese Dismukes snapped it on first down from the 28.

“It was just a miscommunication,” Dismukes said.

Alonzo Williams recovered with 54 seconds left, setting off a celebratory dance for players on the Aggies’ sideline and leaving most of the Jordan-Hare Stadium crowd in stunned silence.Texas A&M coach Kevin Sumlin said stoppages to review several key plays late — all upheld by replay officials — were nerve-racking.

It tied the most points Auburn had scored in a regulation loss, which also happened against Florida in 1995 and Wake Forest in 1979.

They’d won two straight on games that went down to the final play, and coincidentally the biggest play against No. 12 Mississippi was a goal-line fumble.

Allen was poised and steady in his second career start and first on the road. He completed 19 of 29 passes for 277 yards with an interception, mostly avoiding miscues against a beleaguered Auburn defense.

“He definitely had a little swagger to him,” Matthews said.

“He came in this game and he didn’t seem like a freshman at all, he seemed like he has started four years at this university.”

It was a turnaround from the highly touted freshman quarterback’s first start, a shaky 21-16 win over Louisiana-Monroe.

But Allen’s play stepped up along with the competition and he outdueled Marshall.

“He was a lot more relaxed tonight than a week ago, believe it or not,” Sumlin said. “I think that showed.”

It might not have come down to the wire, but Myles Garrett blocked a field goal and Deshazor Everett returned it 65 yards down the Auburn sideline for a touchdown on the final play of the first half, a rapid-fire 10-point turnaround. Auburn spent the rest of the game trying to peck away at that 35-17 deficit. Josh Lambo kicked field goals of 22 and 27 yards in the second half.

Marshall completed 15 of 21 passes for 219 yards and a touchdown while running 18 times for 67 yards. He had only 80 passing yards going into the fourth quarter before finally heating up, with leading receiver D’haquille Williams sidelined for most of the game with a right knee injury.