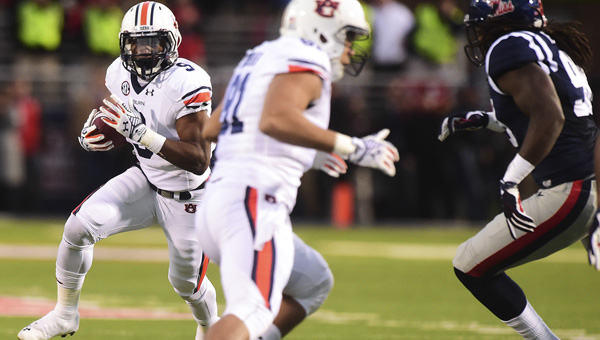 The Tigers’ Roc Thomas looks for an open running lane in Saturday’s game in Oxford.–Zach Bland

OXFORD, Miss. (AP) — Cassanova McKinzy recovered a fumble in the end zone to preserve No. 4 Auburn’s 35-31 victory over No. 7 Mississippi on Saturday night in what amounted to the first College Football Playoff knockout game.

The Tigers (7-1, 4-1 Southeastern Conference, No. 3 CFP) got a reprieve after Rebels receiver Laquon Treadwell lost the ball at the end of a tackle-breaking catch-and-run to the end zone with 1:30 left. It was ruled a touchdown, but the replay official determined he lost the ball before crossing the goal line.

“This was a playoff game,” said Auburn linebacker Kris Frost, who forced the last fumble. “But from here on in, every game is a playoff game. They just get bigger and bigger.”

Auburn milked a minute off the clock before Ole Miss got the ball back at its 49 with 26 seconds left and no timeouts. Bo Wallace, who had fumbled at Auburn’s 6 on the previous drive, threw three straight incompletions before a final desperation play went nowhere.

McKinzy and Auburn coach Gus Malzahn said they had little doubt what the replay would show.

“I knew it was a fumble and I thought we got it,” Malzahn said. “The coaches up in the press box told us we had it, so I knew we were going to get the ball.”

He and the Rebels’ Hugh Freeze had both downplayed the significance of initial CFP rankings with big games to play. Malzahn stopped short of saying it felt like a playoff game.

“It felt like a big game,” he said. “They’re still one of the best teams in the country. I had people tell me it was an elimination game but the bottom line it was 3 versus 4. It’s a really big win for us.”

The Tigers gained 507 yards against the nation’s top scoring defense, the only unit that hadn’t given up 20 points in a game coming into this SEC West clash. An Ole Miss offense held to seven points in a loss to No. 16 LSU matched them nearly yard for yard, gaining 492.

It was a compelling duel between two teams tangling for playoff shots, and two quarterbacks swapping big plays.

Marshall completed 15 of 22 passes for 254 yards with an interception that was Senquez Golson’s nation-leading ninth. Marshall ran and passed for two touchdowns. Cameron Artis-Payne turned in another workhorse game, gaining 143 yards on 27 punishing carries.

Wallace had a 59-yard run and scored on a 3-yarder early in the fourth quarter for a 31-28 lead, but also lost a fumble at the Auburn 6 in the final minutes.

After Wallace’s TD, Auburn answered with Artis-Payne’s 6-yard touchdown run with 10:23 left that proved the last points but didn’t conclude the drama.

The Tigers made a last-play interception in the end zone to preserve a 42-35 win over South Carolina last week.

Wallace’s first three passes fell incomplete, including a drop by Auburn native Cody Core across the middle. Wallace then hit Evan Engram at the 37, Engram flipped it back to Vince Sanders who threw it back to Wallace.

Wallace’s next try fell to the ground, and the game was over. So, too, is the Rebels’ surprising ride into national title contention.

Treadwell appeared to injure his left leg at the end of his third-down catch. He was taken off the field on a cart after breaking two tackles and dragging Frost toward the end zone. He pounded his fist on the ground in pain while officials reviewed the play and fans chanted his name.

After Wallace’s fumble, the Rebels’ defense then held Auburn to a single first down that came on a deflected pass nearly picked off by Golson, who might have had an easy interception for a touchdown. A late hit on the punt return gave Ole Miss the ball at its own 48 with 3:22, but the Rebels came up inches short.

Auburn was penalized 13 times for 145 yards.