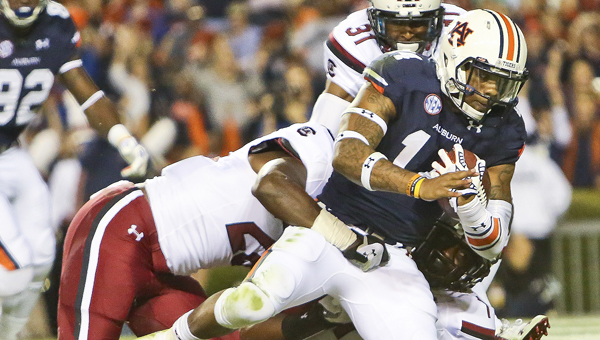 AUBURN (AP) — Nick Marshall ran for three touchdowns and passed for a score and No. 5 Auburn beat South Carolina 42-35 on Saturday night, surviving a scare from the Gamecocks after Steve Spurrier made a succession of gambles that paid off.

The Tigers (6-1, 3-1 Southeastern Conference) finally stopped the onslaught of Spurrier, Dylan Thompson and fourth-down magic late in the game. Auburn burned off four-plus minutes from the clock after the first unsuccessful gamble before the Gamecocks (4-4, 2-4) made a stop at midfield for one more shot.

Thompson, who threw five touchdown passes and helped convert five straight fourth-down tries, took over at his own 15 with no timeouts and 1:08 left. Jonathan Jones made his second interception in the end zone of the fourth quarter on Thompson’s last-play heave to preserve the Tigers’ SEC and national title hopes.

“They went for everything and they got just about everything,” Auburn coach Gus Malzahn said. “They executed when they had to and they did it time and time again.

The Gamecocks, 18-point underdogs, converted an onside kick and four fourth-down plays in their own territory.

Spurrier finally busted on his last gamble. Thompson threw an incompletion on fourth and 14 from Auburn’s 19 that gave the Tigers the ball back with 5:28 left.

The Gamecocks got another chance, and moved into Auburn territory with a completion and personal foul against Jonathon Mincy. Then Thompson threw one final pass into a crowd of players from both teams, and Jones came down with it.

Spurrier said he would have gone for two points and the victory if the Gamecocks had scored.

“It might have been the greatest win I’ve ever had in my life, if it had worked out,” he said. “But it didn’t. Now, it’s just almost.”

South Carolina has lost three consecutive SEC games for the first time since the end of the 2009 season.

Thompson was 29-of-51 passing for 402 yards but was also intercepted three times beyond or near the goal line. Pharoh Cooper caught two of his touchdown throws and had 127 yards on seven catches.

“We almost did it,” Spurrier said. “We didn’t quite make it but we messed up in the red zone a couple of times. We got the onside kick.

“It gave us a fighting chance.”

It was quite a duel between Spurrier and Malzahn, both innovative offensive minds who seemed engaged in a chess match of differing styles. Both had their quarterbacks catch passes for first downs, and both stuck to what they do best.

The difference: Auburn scored four touchdowns on trips inside South Carolina’s 20-yard line. The Gamecocks were 2 of 5 with the three picks keeping them out of the end zone.

As a young coach, Malzahn took to wearing a visor on the sidelines because Spurrier was doing it at Florida.

“Their coach is one of the better coaches to ever walk the sidelines,” Malzahn said. “I think everybody saw that with the fourth-down calls and the onside kicks. But at the end of the day our guys found a way to win. Our defense didn’t play their best but at the very end they came through.”