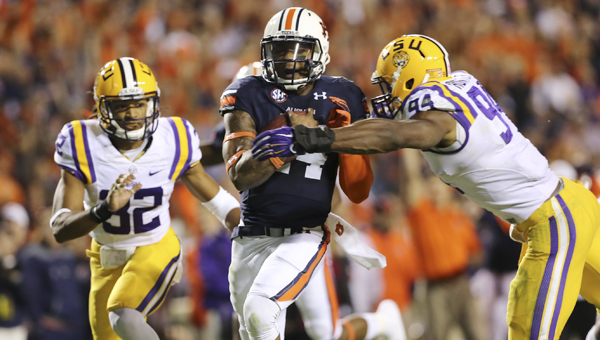 Auburn quarterback Nick Marshall runs for a touchdown in Saturday’s game against LSU. The Tigers won the game 41-7 to improve to 5-0 on the season.–Doug Horton

AUBURN (AP) — Nick Marshall and the Auburn Tigers rose to the occasion on a week when most of the teams ranked ahead of them fell.

Marshall passed for 207 yards and two touchdowns and ran for 119 yards and two more scores to lead No. 5 Auburn to a 41-7 blowout of No. 15 LSU on Saturday night.

Auburn (5-0, 2-0 Southeastern Conference) dominated from the start on a week when No. 2 Oregon, No. 3 Alabama and No. 4 Oklahoma were upset. The 41 points equaled Auburn’s highest total in the rivalry — set with the same margin in the 1999 game.

“Nick played like one of the better quarterbacks in the entire country,” Malzahn said.

And Auburn played like one of the better teams.

Harris completed 3 of 14 passes for 58 yards before getting replaced late in the third quarter by former starter Anthony Jennings.

With Marshall playing again like the Heisman Trophy candidate many expected him to be, Auburn could rise to the No. 2 spot it held after last season.

He completed 14 of 22 passes, had 16 carries and supplied a steady diet of big plays. Marshall threw touchdown passes of 56 yards to Sammie Coates and 9 yards to tight end C.J. Uzomah, and scored on runs of 7 and 29 yards.

Cameron Artis-Payne ran 24 times for 126 yards and gained 35 yards on three catches. Coates had his first big game of the season with 144 on four catches after coming in with 56 receiving yards.

He matched that by with the long grab away from cornerback Rashard Robinson, who had good coverage.

“He made an unbelievable catch,” Malzahn said, adding that it “kind of got us going.”

Auburn outgained LSU 566-280, the most yards it has produced in the series. LSU had won the past three meetings but couldn’t muster much fight in this one and is likely already out of the hotly contested SEC West race.

LSU coach Les Miles sent in the former starter Jennings to replace Harris late in the third quarter, but the results didn’t change dramatically. Neither quarterback managed to convert any of their combined 13 third-down attempts.

Harris had led LSU to touchdowns on nine of his previous 10 drives but a 52-yarder to fellow freshman Malachi Dupre and a 36-yard run were his only real highlights in his first game before a hostile crowd.

The long pass set up Kenny Hilliard’s 1-yard touchdown run late in the first quarter in a freshman-sparked drive with the Harris-to-Dupre strike and the runs of Leonard Fournette. Jennings was 5-of-10 passing for 84 yards after struggling against New Mexico State a week ago. Miles said he hadn’t made a decision on his starter for next week;s Florida game.