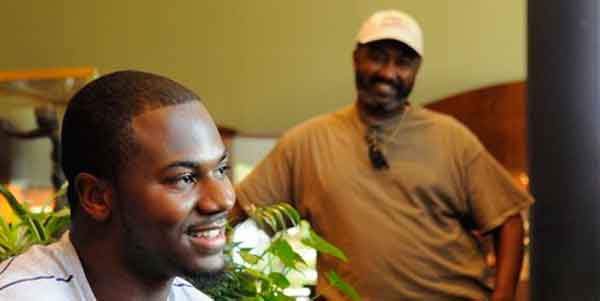 Auburn football player Zac Etheridge talks to the media about his healed neck injury and his return to NCAA college football on Tuesday July 20, 2010 in Auburn, Ala. Etheridge's father Donald Kelly is in the background. Etheridge sustained a serious neck injury against Mississippi on Oct. 31, 2009. Auburn confirmed that he will be able to play. The Tigers open fall practice on Aug. 3. --AP Photo/Todd J. Van Emst

Etheridge was cleared last week to return to football from a serious neck injury sustained during last season. Chizik wouldn’t elaborate on the plan for Etheridge but said coaches would frequently consult with the team’s medical staff.

He called Etheridge “a tremendously, tremendously blessed young man” for being able to recover from the injury.

Fellow defensive back Aairon Savage says he was happy when Etheridge was cleared to play but wasn’t surprised. He has some experience with injuries, having missed the past two seasons with a torn knee ligament and a torn Achilles tendon.

HOOVER — Derek Dooley is no Lane Kiffin. The new Tennessee coach was politically correct and controversy-free in his first... read more