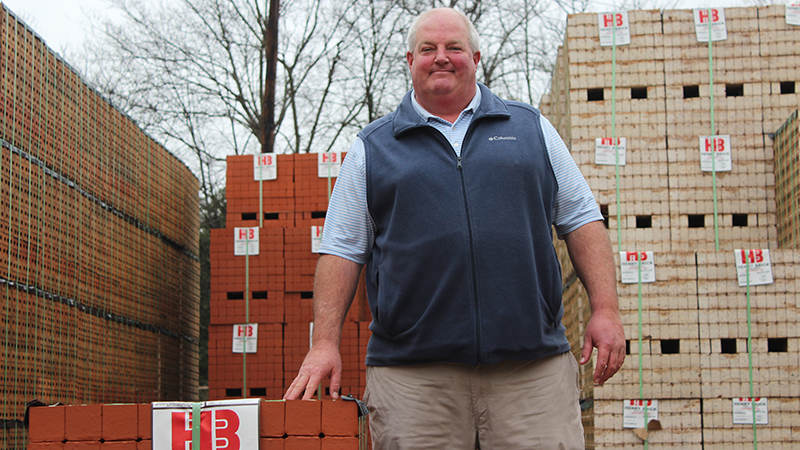 Winding one’s way through the labyrinth of industrial machinery that covers nearly every inch of the plants behind Henry Brick Co. on Water Avenue is a thrilling experience – feeling the 2050-degree heat beaming from the kilns sucking water out of freshly-made brick, watching conveyer belts send rows of brick to be soaked, split, smoothed and sent around the room like a clay-made locomotive and hearing the sounds of hisses, booms and cracks seeping out of multi-colored machines – and it’s not lost on Henry Brick Co. President Davis Henry, who gazes at the business built by his grandfather 75 years with a sense of pride and amazement.

“It’s kind of interesting,” Henry said. “My granddad was in the timber business, he bought and sold timber and, at the time, there was a Selma Brick Works…just north of the railroad track here and they had enjoyed a lot of success and done well in business. Grandad, from what I hear, always said that it looked like they had an easier go at it than he did cutting trees.”

“At the time, there was a big change in technology in the brick business,” Davis Henry said. “Pre-40s, you had what you called a beehive kiln, it was a round kiln that you hand loaded; it took about a week to two weeks to bring the temperature, fire the brick and you had to let it cool off then you opened the door and hand unloaded the brick out of the kiln. In the 40s, they developed what we call a tunnel kiln and the difference there is the kiln and dryer continuously operated – you didn’t have to bring the temperature up and take the temperature down, you just put a car in the front end of the kiln and the car came out of the other end so there was continuous push. It was a lot more efficient, a lot more cost effective, so granddad decided after touring a few brick plants in Georgia with a local banker…he decided to go into the brick business here.”

With that, John David Henry built the first kiln on Water Avenue.

“Through this new technology, he was a lot more efficient,” Davis Henry said. “A year later, he ended up buying the Selma brick plant and operated it for a number of years as well.”

“In the 60s, you had another kind of technology explosion in the brick industry, so we had two plants here in the original building on Water Avenue and business was good so they decided the built another plant here on this site,” Davis Henry said. “It began operation in 74 and so that’s when we became a two-plant operation.”

John David Henry got to see construction of a new plant begin, but never got to see it operate before his death in 1973 – after that, the torch as passed to the second generation and Ted Henry, who would see the company through the boom years of the late 90s into the Recession era, took the helm.

In 1978, the original kilns were torn down and one was built in its place.

“I guess there’s been a lot of changes in 75 years,” said Davis Henry with a laugh.

By this point, the company was producing roughly 70 million bricks per year, though Davis said the company never really hit capacity during those years – by the early 90s, following work on the product line and quality, the copany began enjoying more success and investing in improvement projects across the two plants.

After that, the company was up to a capacity of more than 100 million bricks per year.

“There’s been no new kilns added, but we’ve extended kilns, changed dryers, taken advantage of new technology and done other things,” Davis Henry said. “So through those projects, over a span of about 15 years, we’ve really maxed out these two plants.”

The boom years of the 90s gave way to the bust years between 2008 and 2017 and the company was forced to drop down to only one plant.

When Ted Henry officially stepped down in 2010, only four years before his death, Davis Henry took over the business alongside his brother, Denson, and brothers-in-law Jim Cothran and John Hanning.

Now at the helm, Davis Henry can still remember visiting Henry Brick Co. as a child and sitting atop the kilns and, later, returning to work in the plant throughout his high school years – after college, Davis Henry found work in banking and briefly toyed with the idea of moving away.

Davis Henry and his father had a conversation about the family business, when he was in the process of sending out resumes, and he started working with the company in 1993, just in time for the company’s seismic growth spurt.

“The first 15 years, it was a fun time to be in the brick business, there was a lot happening,” Davis Henry said. “We were able to really do a lot with the plants and see this huge growth in 15 years.”

Though he notes that the company hasn’t shipped 100 million bricks since 2006, Davis Henry hopes to see his company cross that threshold this year.

“It would be a nice goal for our 75th anniversary,” Davis Henry said.

“There was such a long period of uncertainty…you were in a survival mode, it was really just hunker-down and try to survive,” Davis Henry said. “The last three years have been better and that’s one thing we’ve talked about is where we see the family business going. There’s been a lot of family discussion about where you take it from here, what you do and how do you structure that and we’re still exploring that.”

Still, Davis Henry is thankful for the brick industry – the 95 employees that come to work each day at his grandfather’s business, some of which have been working there for 50 years; the success its provided him and his family; the impact it’s made in Selma and across the region.

“Our family has truly been blessed in the brick business,” Davis Henry said. “To think that it’s supplied for our family for 75 years. And not just our families, we’ve got employees who have been able to depend on us for employment for 50 plus years. To be able to provide for those families here in Selma and be a part of the community here in Selma has been important to us. One thing we’ve learned is it’s important to take care of the folks that work for you and make sure they have what they need. We’ve been blessed with really good people. That has made it a whole lot easier. We’ve also felt it important to be a community partner in a lot of things in Selma, to support what we can and do what we can civically to help Selma be all it can be, because this is where we all live and we really don’t want to be anywhere else.”