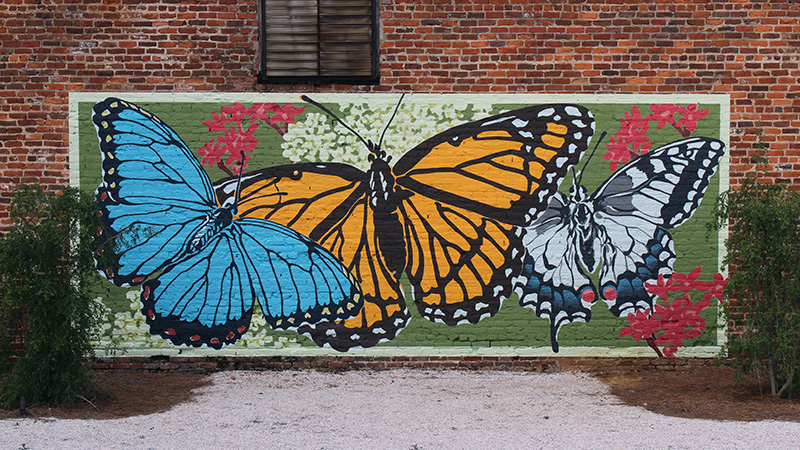 Over the past few years, the streets of Selma have become much more colorful as local non-profit groups and artists have come together to put up murals all over the Queen City.

One of the city’s newest murals, situated on a long-ignored wall at 14 Broad St., is a tribute to Selma’s roots in the Civil Rights Movement and the men and women who led that charge.

Made possible by a partnership between Selma and Mahoning Valley Sojourn to the Past from Youngstown, Ohio and painted by local artist Shelia Ferrell, the mural depicts Patricia Blalock, the local library director who integrated the Selma Public Library, without court order or public demonstrations to force her, and hired the city’s first African-American librarian; John Lewis and Hosea Williams, who led 600 locals across the Edmund Pettus Bridge in what has come to be known as Bloody Sunday, when peaceful protesters were beaten by local law enforcement officers; Amelia Boynton, leader of the Dallas County Voters League and one of those beaten on the Edmund Pettus Bridge on Bloody Sunday; Jimmy Webb, who at 16 led a group of teens to the local courthouse to pray following Bloody Sunday – Webb was confronted by a deputy sheriff, who attempted to intimidate him, but employed the principles of nonviolence to hold strong in his demonstration; Rev. James Reeb, the Unitarian minister from Boston who answered Dr. Martin Luther King Jr.’s call for people of faith to descend on Selma following the events of Bloody Sunday – Reeb was badly beaten while in Selma and later died from his injuries; Viola Liuzzo, who came to Selma from Detroit after Bloody Sunday – Liuzzo was transporting demonstrators between Selma and Montgomery when her car was attacked by Ku Klux Klansmen and she was killed by a gunshot to the head and the Passage of the Voting Rights Act of 1965, which gave black people the right to register to vote for the first time.

In 2018, ArtsRevive gained sponsorship from Coca-Cola and hired Farrell to restore the Coca-Cola Mural on Lauderdale Street.

It took Ferrell three weeks to complete the project, the biggest challenge she faced was not the physical obstacles caused by weather and time, but rather restoring it to the original old-time authenticity it possessed.

Ferrell succeeded and anyone traveling down Lauderdale toward Water Avenue can’t miss the bright red and green, 11-feet-tall by 82-feet-wide work of art.

While both of Ferrell’s murals are celebrations of Selma’s past, ArtsRevive and R.B. Hudson STEAM Academy collaborated earlier this year to create a mural looking toward the future.

The students and ArtsRevive, with help from Cougar Oil and The Links, Inc., worked together to give new life to a worn-down former body shop owned by Cougar Oil off Water Avenue.

The students collaborated during art class for several days to come up with a design they believed represented the future of Selma.

Further down Water Avenue, in Pheonix Park, Alabama artist Tres Taylor painted a mural in 2019 in partnership with the Blackbelt Benefit Group (BBG).

The mural overlooking Phoenix Park is Taylor’s third. The first was painted in Oaxaca, Mexico and the second in Birmingham.

The mural is done in Taylor’s signature style and features a woman riding a bicycle with a basketful of wildflowers and a trail of swallowtail butterflies behind her.

Taylor described the character, Madame Butterfly, as “the patron saint of wildflowers, swallowtails and the uplifted.”

On the other end of Water Avenue in ArtsRevive’s recently-opened Pocket Park, another homage to Selma’s’ title as the “Butterfly Capital of Alabama” is in the works – Michael Vaughan Sims has nearly completed a butterfly mural that looks right at home in the Queen City and adds yet another artistic chapter to Selma’s growing tale.