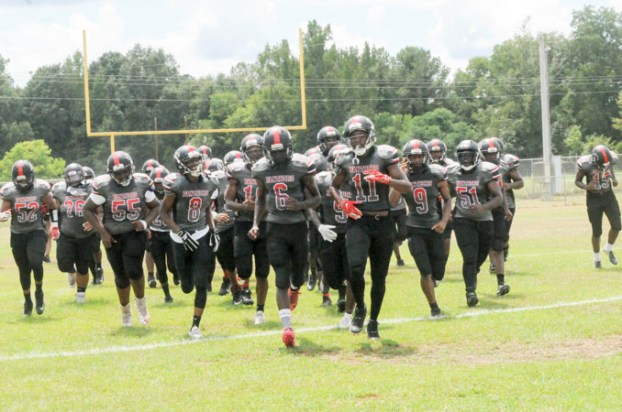 “We have to stay focused this week,” Moody said. “There will be a lot of distractions, but we have to remain focused on the goal. The game is meaningful in two areas, its homecoming and a region game. We have to get our kids to understand that homecoming is for the alumni and not them. It is the player’s duty to finish the festivities with a win for everyone.”

“Calera will be a tough football team with a good athletic quarterback,” Gandy said. “On defense, they have an Alabama commit that’s really disruptive on their defensive line. We have to go into the game, play good defense, limit mistakes on offense and take what they give us.”

Greensboro at Dallas County: The Hornets (2-3, 2-1) can improve their state playoff chances in Region 3, Class 4A with a win at Martin Field in Plantersville.

Quarterback Calvin Griffin and running back Aaron Fails are among the Hornets that have shined this season.

“Greenboro’s a very athletic group of young men and very difficult to tackle at times,” Hornets coach Heath LeVert said. “We’re going to have to be sound defensively in order to be successful this week. We must commit ourselves to do the little things right in order to see big results on the scoreboard.”

Morgan Academy at Springwood: The Senators (2-4, 0-2) need a victory to keep their AISA state playoff hopes alive in Lanett.

Morgan Academy coach and Athletic Director Josh Thacker said the Senators can’t afford to make errors against the Wildcats (2-4, 0-2). Running back Holt Utsey has rushed for 935 yards and 10 touchdowns for the Senators.

“We have another long road game against a well-coached, athletic football team,” Thacker said. “The mistakes we made against Success Unlimited will get us beat if we don’t play more disciplined. We’re improving from week to week but still lack in some facets of the game.”

The Bears’ offense need to make plays and compliment quarterback Jared Edwards, who scored the team’s only two touchdowns against Southside last week.

Sparta at Meadowview: The Trojans (0-5) host Sparta for homecoming at Wadsen Field, searching for their first victory of the season.

“Sparta is a much improved team from a year ago,” MCS coach Bob Taylor said. “Sparta coach Arlton Hudson is doing a great job in turing their program around. They are physical at the point of attack. We will have to play at our best to compete with them.”

Ellwood Christian Academy at Maplesville: The winless Eagles (0-5) face their toughest test on the road at Maplesville (5-1, 3-0).  The Red Devils hammered Keith 56-6 two weeks ago in Orrville.

The City of Selma Parks and Recreation Football League officially got underway on Sept. 18 at Memorial Stadium. The Selma... read more