Why I love Selma – Dianne Harris 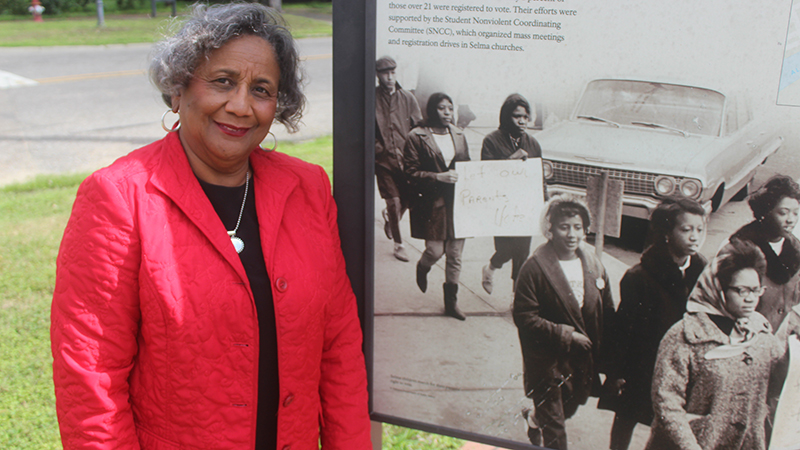 Despite growing up in Selma during one of the most tumultuous times in American history, Voting Rights Movement veteran Dianne Harris reflects on her childhood in the Queen City with fondness.

“Even though I lived in the Jim Crow era, my childhood was very happy,” Harris said. “Materially, I had everything I needed and some of what I wanted.”

Harris recalls Saturday afternoons as a child in Selma – after piano lessons, she and her brother and older cousin would walk over to a black-owned bakery called La-Wea’s Confectionery, which Harris says had the best doughnuts around.

On Sundays in the summer, she would visit the neighborhood snow cone shop after dinner and purchase a cone of ice doused in a variety of Kool-Aid flavors or head down to Lannie’s Bar-B-Que for a family outing.

She remembers learning how to roller skate and ride a bicycle on the streets of George Washington Carver (GWC) Homes.

Harris attended school in Selma at the Alabama Lutheran Academy and College, most recently remembered as Concordia College, and took part in the Voting Rights Movement of 1965.

“I have the distinct title of a ‘jailbird,’” Harris said. “I was arrested twice. Thankfully, my records were expunged.”

After completing her sophomore year of high school, Harris relocated to Atlanta and eventually wound up graduating from Alabama A&M University in Huntsville with a degree in elementary education and special education.

With degree in hand, Harris returned to Selma to care for her mother and find a job in education – she went on to be hired by Selma City Schools as a Special Education teacher at Edgewood Elementary School, where she worked for 27 years.

After her nearly three decades as an elementary school teacher, Harris took a job as Assistant Director of the Parent-Child Enrichment Program at Concordia, a post she held for six years.

But Harris has not been slowed down by retirement – quite the contrary, she is as active now as she has ever been before.

Along with being a lifelong member of Trinity Lutheran Church, where she serves as President of the Senior Choir, President of the Lutheran Women’s Missionary League (LWML), Church Bulletin Board Coordinator and Altar Flower Chairperson, Harris volunteers with voter registration drives and is a member of the American Cancer Society’s Relay for Life Steering Committee.

Further, she continues to volunteer at local elementary schools and helps out weekly at the Christian Outreach Alliance Food Pantry and more.

“Volunteering is very special and dear to me,” Harris said.

Along with her volunteer work, Harris is a Civil Rights Tour Operator with Selma Historic Cultural Tours, where she gets to share her personal story as a 1965 foot soldier.

“Selma is a unique, small town with charm and rich history,” Harris said. “Selma is a place that embraces a sense of pride based on its historic shaping of civil history. Because of its small circumference, the citizens are rich in love and community. Self-satisfaction underlies in the cause for hope and faith that rests in the turning point in our democratic society that led diverse populations to unify based on the common good for all mankind.”

And while she celebrates the rich history and beaming sense of community her hometown has to offer, Harris sees ways in which the city could continue to grow.

“One of the most difficult endeavors is not having enough time and resources to complete the many projects that Selma needs,” Harris said. “Every city should be improved and Selma is no exception. Although Selma is a great staple in Alabama, there are always opportunities for growth.”

Harris believes more cultural activities, such as music festivals, art shows and food tastings, would be a boon for the city, as well as a more concerted effort to enrich the riverfront area and work to create a youth center.

“Comprehensively, we should continue to build our brand around cultural endeavors that focus on the civil rights era,” Harris said. “Education of Kindergarten through high school students, as well as our citizens, on African American history in relation to Selma would allow our generations to promote the present, as well as the future, without being victims of the past.”

From the historic homes to the sunny weather, from the sense of community to a deep-rooted history, Harris believes Selma is a town unlike any other.

“Selma is an unsung place of quietness,” Harris said. “It is also a place where those who wish to achieve can do so. Come to Selma with a mindset to help rather than destroy and criticize.”