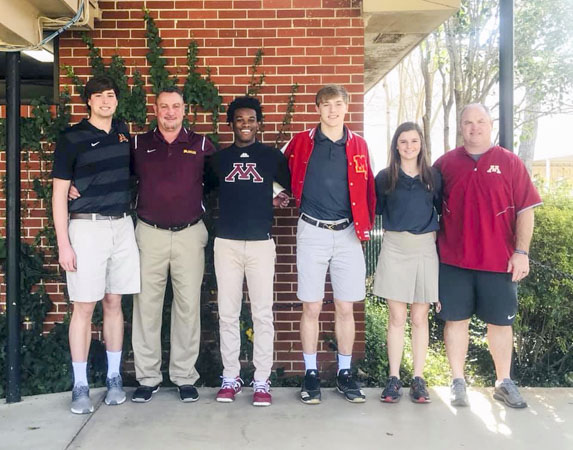 Morgan Academy will be represented at the AISA All-Star Basketball game this week.

Four Morgan Academy players and three cheerleaders will participate in the AISA All-Star game, which will be played Friday at 6 p.m. at the Cramton Bowl Sportsplex in Montgomery.

Gunnar Henderson, Dione Allen and Hayden Bruner will be on the boys’ All-Star squad.

Abigail Lane will be on the Girls’ All-Star team.

Morgan Academy cheerleading coach Alex Harrelson and Director of Instruction Karim Oaks will be part of the coaching staff. Oaks will be the cheer coordinator.

“We are very excited to get three  guys in the all star game,” Knight said. “hese seniors are 31-10 over the past two seasons. All three have bright futures after Morgan Academy.

“They are A1 citizens on and off the court,” Knight continued. “These guys and all of our seniors have worked hard and laid a solid foundation for Morgan Academy in all sports.  I’m looking forward to watching them Friday night.”

“Abigail is a very hard working player,” Jones said. She does extra shooting before and after practice. It was truly an honor to coach her. She will be successful in whatever she does in the future.”

Harrelson said she’s grateful for a final chance to coach her senior cheerleaders.

“It’s a privilege to be able to coach my senior girls and the other AISA All-Star cheerleaders,” Harrelson said.