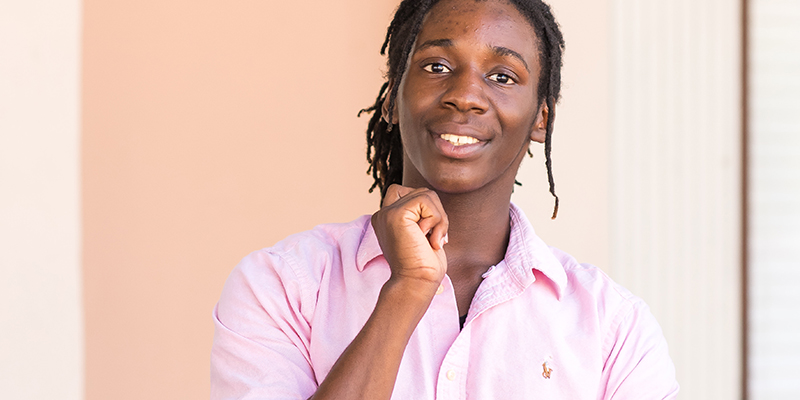 J.J. Evans was an aspiring artist who lived in a housing project during the show’s six-year run on CBS from 1974-1979 and didn’t get his big break until the series’ finale.

Harrell said he never watched Good Times, but he hopes for a happier ending like the Evans’ character received.

Since graduating from Selma High School in May, Harrell has spent his time drawing in various parts of the Queen City. His drawings arrange from animated characters to foreign women. He’s also attended local art exhibitions.

Harrell was introduced to art at the age of five after seeing his older brothers, Marshaun Davis, Xavier Davis, Ken’Nautica Davis and Ken’Nigel Davis draw.

“I used to watch them draw and asked how they did it,” Harrell said. “They told me, ‘just keep drawing.’”

From there, the brothers began their own competitive art exhibitions.

“We used to have art competitions against my older brothers,” Harrell said.

The competitions occasionally got heated.

“I drew a car once and one of my brothers said, ‘That doesn’t look like a car,’” Harrell said. “They laughed. When they made fun of me, it was disappointing. It motivated me to improve my drawings. I said, ‘I’ll show them.’”

Harrell, 18, received support outside his family in the sixth-grade at Selma School of Discovery (SOD) with teacher Michael Polnitz.

“When I was young, I did a lot of bad stuff and fought people,” Harrell said. “Mr. Polintz told me I had potential and showed me how to shade my photos to make them look more life-like.”

Harrell said Polinitz was always encouraging him about drawing.

“Mr. Polinitz told me I was doing stuff he hadn’t taught me yet,” Harrell said. “He told me to keep going even when things are tough.”

Over the years, Harrell has collected honors for his artwork.  As a freshman at Selma High, his butterfly book won first place in an art competition.

A Selma High classmate, Nira Gary, encouraged Harrell to do a book collection of his artwork. Jordana Evans also encouraged him to paint during the summer.

Listening to music, Harrell says, often puts him in the mood to draw.

“I prefer listening to something peaceful, maybe Japanese-related,” Harrell said. “I can also listen to Chris Brown or Michael Jackson.”

Harrell said his ultimate dream is to draw pictures in another country.

“I’d like to draw somewhere like Paris or in Japan because most of my drawings relate to overseas,” Harrell said.

One of the local events Harrell attended was the Truth Booth, which was recently held at the Songs of Selma Park at the foot of the Edmund Pettus Bridge. People went inside a 15-foot plastic speech bubble and spoke the truth.

“I was told it’d be a good opportunity to show my artwork,” Harrell said. “I want to get people’s opinion and get good advice.”

Harrell enjoys drawing an assortment of things, but it depends on the situation.

“I like the landscape because it looks so nice. I also like drawing animated characters,” Harrell said. “I like nature, too. If I had to pick one thing to draw, I don’t know what it would be.”

Harrell vows not to give up pursuing his dream of becoming a commercial artist.

“I’m determined to make it,” Harrell said. “I keep this in mind. God gave me a talent and I’m not going to waste it.”

Dobbs finds his own personal heaven in knife craftsmanship