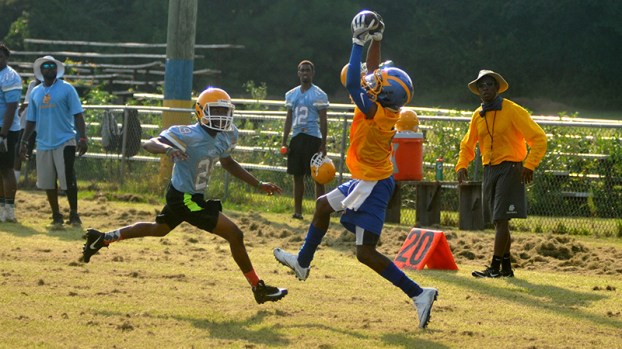 Keith’s Anthony Lumpkin Jr. comes down with a leaping catch before running it in for a touchdown during the seven-on-seven scrimmage against Selma High.

The seven-on-seven scrimmages at Keith High School started later than scheduled, but the Bears and the Selma High Saints were still able to get in an afternoon of competition out in Orrville.

Two other teams were scheduled to participate, but conflicts left the Bears and the Saints as the only two teams on the field.

Nevertheless, each team began warmups around 5:30 p.m. and prepared for practice.

The two teams have very different offenses, so the defensive players had the opportunity to see something other than what they’ve been practicing against.

“This gives us a chance to really compete,” Bears head football coach Anthony Lumpkin Sr. said. “Competition is good, but it’s nothing like having an opposing team come in and help you see where your guys are and see who is willing to compete when they see the different colored jerseys.”

The Saints are a spread team that uses multiple receivers, while the Bears quarterback setup under center for most of his snaps.

“I’m impressed with what we’re doing,” Saints head football coach Christopher Raymond said. “I just think we have to execute a little better, make the proper reads and catch the ball when it comes to us. But throughout all of this, I’m still excited. Any time you get a chance to get some work in before the season, you enjoy the moment.”

The Bears are known to be a running football program, but in the pass-only scrimmage, they worked on stretching the field with play action passes and crossing routes.

The two teams are still in pre-season mode, but there were flashes of highlight plays throughout the afternoon.

Saints quarterback Tyreshon Freeman and his primary target Gabriel Wade appeared to be in sync with each other, much like they were last season.

They connected for multiple receptions and a couple touchdowns early in the scrimmage.

Anthony Lumpkin for the Bears made a fantastic catch down the sideline after beating his defender and leaping for the ball. Keith quarterback Jared Edwards also looked good making throws on the run.

The teams went back-and-forth with each other playing on last 40-yards of the field that was setup for the games. The pre-season work gave the local rivals a good luck at where they are heading into the last few weeks before official practice begins on Aug. 6.

The Dallas County School Board voted and approved Anthony Lumpkin to become the new head football coach for the Keith... read more