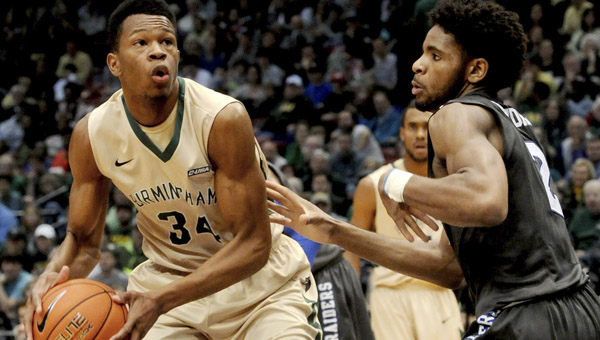 UAB’s William Lee works against the defense of Middle Tennessee’s Perrin Buford during the first half of the Conference USA tournament championship game in Birmingham, Ala., Saturday, March 14, 2015. After completing his senior season, Lee has re-entered his name into the NBA Draft and had a workout with the Los Angeles Lakers. (Mark Almond/ malmond@al.com)

Former Dallas County High School basketball state champion William Lee took the next step in his basketball career this past Tuesday when he went through a pre-draft workout for the Los Angeles Lakers.

It was an unexpected call, but Lee was excited to have an opportunity to prove himself in front of NBA coaches and scouts.

“I wasn’t really expecting that, honestly,” he said. “It was a great opportunity and a great experience to go out there and showcase what I had and my skills on the next level.”

Lee went through half-court and full court drills. One-on-one’s, three-on-three’s, spot shooting and several other drills for the Lakers to evaluate.

“It really was everything you do in a normal workout,” he said. “But you’ve got people watching you, so it’s a little pressure on you. But it’s the same thing we’ve been doing all our lives, which is basketball. Just putting the ball in the hole and showing what you can do.”

One of those people watching was Lakers legend and president of club operations Earvin “Magic” Johnson.

“I was speechless to meet a guy like Magic,” Lee said. “He’s got this vibe to him like he’s always happy and in a good mood.”

Magic spoke to the prospects at the workout, and left an impression on Lee.

“He talked to us as a group, and I got that positive energy from him,” he said. “He knows a lot about basketball because he played in the NBA, he played college ball, he won some rings and did all this great stuff. He’s just trying to show the younger generation how to get it done.”

Lee was confident going into his workout, but he was hoping for it to be perfect.

“I felt great going into it, but I really didn’t shoot it like I wanted to,” he said. “I didn’t want to miss a shot, honestly, but things happen.”

No matter what happens, Lee plans on continuing his basketball career.

“I feel pretty good about my future, if that’s in the NBA, the G-League or across the seas,” he said. “I’m going to play at the next level sometime next year. I don’t know where. Hopefully it’s the NBA, but I’ll take anything right now.”

Lee is a 6-foot-9, 215-pound power forward known for his shot blocking ability. He had a season-high game against Florida Atlantic this past March where he scored 20 points and made four 3-pointers.

He was selected to the Conference USA All-Defensive Team for the third consecutive season. He was second in the conference and 36th in the NCAA with 2.1 blocks per game. He blocked 66 shots in his senior season and his 292 career blocks made him UAB’s all-time leading shot blocker. Lee is UAB’s third all-time leading rebounder (831) and its 14th highest scorer (1,362 points).

“I wanted to hang one more banner up before I left (UAB),” Lee said. “But overall, I had a good experience here at UAB. They pointed me in the right direction and put me in a position in order for me to go out and showcase what I can do at the next level. I think coach (Robert) Eason did a good job with that along with his coaching staff.”

It’s a waiting game for Lee now. So far, the Lakers have been his only NBA workout. But he’s optimistic that he will get an opportunity to continue playing somewhere.

“I gotta talk to my agent, and he’ll let me know what the feedback was, what LA said and how they felt about me,” he said. “We’ll keep going forward from there. The only way we can go is forward now.”

The team went 35-47 this season and finished 11th in the Western Conference standings.

The Lakers currently have three power forwards listed on their roster including Julius Randle, Kyle Kuzma and Channing Frye.