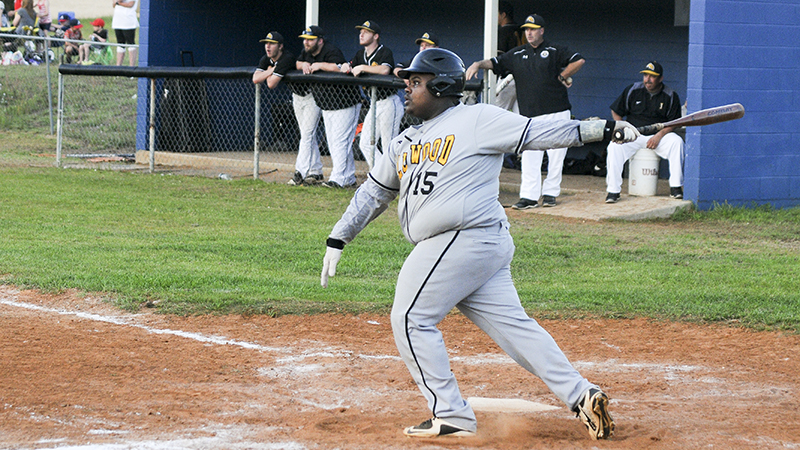 Ellwood Christian’s Gary Crum Jr. hits a one-out line drive to left field for a double on Monday afternoon against Isabella. Crum Jr.’s hit was the team’s only hit in the game.

The Ellwood Christian Academy Eagles were shutout and nearly no-hit in a 16-0 loss to the Isabella High School Mustangs on Monday afternoon at Selma University.

The game started an hour after the scheduled time, but Mustangs starting pitcher Jarrett Baker wasn’t fazed by the delay.

Baker sent 11 hitters back to the dugout on strikeouts in four innings of work.

In the top of the fourth, Baker needed one more clean inning to earn the complete game, no-hit shutout victory.

He struck out the first batter looking, but then Gary Crum Jr. stepped to the plate. The Eagles had nothing left to lose, so Crum Jr. had the green light on a 2-0 count.

He connected with a chest-high fastball and drove it deep into left field. The Mustangs left fielder gave up on trying to catch it in the air and chased the ball down while Crum Jr. rounded first base and headed for second.

The sound of the hit got the attention of the Eagles players in the dugout and their fans. They cheered in excitement for the first ball the Eagles were able to put in play against Baker.

Before Crum Jr.’s hit, the Eagles’ only four baserunners of the game made it to first base on walks.

Baker walked Kentavious Olds after giving up the double, and Ellwood finally had a runner with scoring position. It was their best opportunity to ruin Baker’s shutout.

Even with the Eagles threatening, there wasn’t any pressure on Baker, who had a16-run cushion to lean on.

He remained in the stretch like he had done all game and struck out the final two Ellwood hitters to end the game.

Errors, wild pitches and passed balls made a difficult game against a tough opponent even harder. The Eagles allowed two inside-the-park-homeruns on plays that were hit directly to a fielder. Poor communication and missed defensive assignments allowed the Mustangs to be super aggressive on the bases.

The aggressiveness did backfire in the top of the fourth when Eagles catcher Malachi Washington caught a Mustangs runner stealing at second.

The Eagles are only three games into the season and have a lot of things to work on. Even though it took until the end of the game, the Eagles managed to at least get a hit on the scoreboard.

“We’ll come around,” Crum Sr. said. “I know the score today doesn’t dictate that, but we’re turning the corner.”