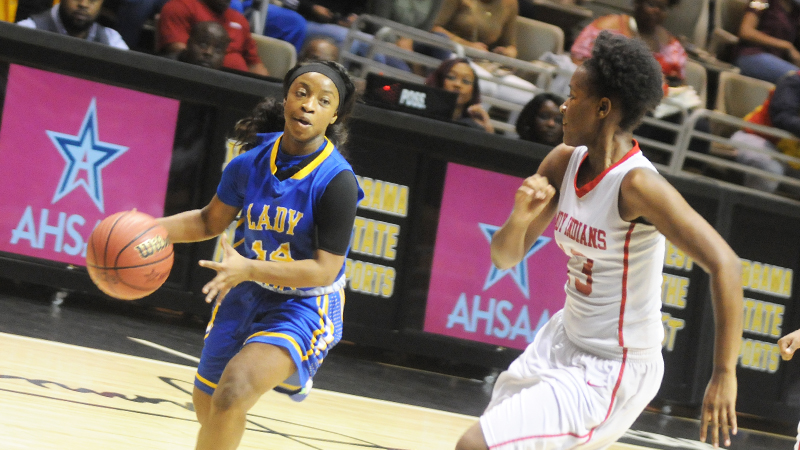 Keith’s Ambreya Snow gets the ball on a fast break Friday night in the Bears’ 54-50 win over Southern Choctaw. (Thomas Scott | Times-Journal)

In the fourth quarter, when it counted most, the Keith High Lady Bears defense locked down the Southern Choctaw Lady Indians and secured a 54-50 win.

In a game that was tightly contested through three quarters, Keith defeated Southern Choctaw in the Class 2A region semi-finals at the Dunn-Oliver Acadome at Alabama State University in Montgomery Friday.

“I think they had a lot of jitters the whole game,” Keith head coach Cecil Williams said.

The Lady Bears entered halftime with a 29-25 lead over the Southern Choctaw Indians, but it wasn’t easy.

Neither team was able to establish a commanding run without it being interrupted by a swift shift in momentum.

Jakyra Simmons opened the scoring for the Lady Bears with a 3-pointer in the first quarter.

After the opening basket, Keith forward Shatavia Moore assumed her role as the primary scorer and began attacking the basket.

Moore was able to work inside the Indians’ defense to get close range shot attempts.

She scored 10 points in the first half, and finished the game with 19 points and 10 rebounds.

“They kind of took [Moore’s] shot away a little,” Williams said.

“But they were letting her drive and nobody cut her off, so that helped. When they did cut her off, she dropped it off to the person on the block.”

Even though, Keith was able to find good scoring opportunities, they left several points at the foul line that could have increased their lead. The Lady Bears shot 27 percent from the line on 11 attempts in the first half.

The Lady Indians managed to keep the Lady Bears within range by making timely shots.

Even though they only shot 37 percent from the field in the first half, the Lady Indians made three 3-pointers.

The Lady Indians outscored the Lady Bears 13-11 in the third quarter, and made a push to cut into the lead.

Missed shots and turnovers were constant problems for the Lady Bears in the third period.

However, the girls looked like a different group in the fourth quarter.

Snow and Moore combined for three steals early in the quarter that led to fast break points.

Keith’s defense limited the Lady Indians to just one field goal, and put the game away by building their largest lead of the night.

“Defense is what we really focus on,” Williams said.

“We know that we can score offensively, but when we get stops on defense and put points up that puts pressure on the other team. Those three turnovers gave us a boost.”

The win puts the Lady Bears in the region finals on Thursday, Feb. 22 at 9 a.m. against R.C. Hatch.

The winner of that game advances to the Final Four in Birmingham.

“We’ve got to focus harder because this will be the fourth time we’ve played them,” Williams said.

“When you’re playing the same team, you know each others tendencies. It’s more of who makes the fewest mistakes, gets rebounds and has more success on offense.”