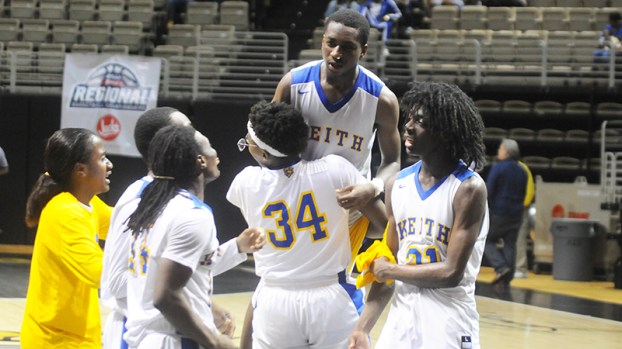 Kendarius Perry is lifted up by his teammates Friday night in the Bears’ 61-57 win over Goshen. (Thomas Scott | Times-Journal)

The Keith High Bears’s offense was in hibernation mode during the first quarter of the central region semi-finals against the Goshen Eagles on Friday night at the Dunn-Oliver Acadome at Alabama State University in Montgomery on Friday night, but the team pulled off the comeback of the season and defeated the Eagles 61-57 in overtime.

“It was a really emotional game,” Keith head coach Clifton Reeves said. “I think in the first half we played a little tight and a little afraid. We didn’t do what we normally would do. We took their best punch that first half. We staggered, but we still stayed in the game.”

The first quarter was rough for the Bears on the offensive and defensive ends of the court. They allowed the Eagles to jump out to 15-3 lead, and it appeared as if Keith wasn’t even at the game. The Bears only made one field goal and a free throw, while the Eagles were finding shots in the paint and from the perimeter.

In the second quarter, Keith guard Tyre Webster was the first Bear to wake up. He knocked down a 3-pointer that sparked his offense. Once his shot started to fall, his teammate Arayvion Jones’ offense picked up as well and the team had a completely different second quarter.

Webster and Jones combined for 20 points in the second quarter and helped the Bears take a huge cut out of Goshen’s lead. Webster finished the game with 15 points, and Jones scored 14.

“Tyre played really big for us,” Reeves said. “In that first half when we were stagnant, he pretty much kept us in the game.”

The Bears were playing better to start the second half, but they were held back by their inability to hit free throws. They missed all five of their attempts from the line that quarter, and that threatened to slow down the teams’ rally. Free throws were a problem all night for Keith as they only shot 30 percent from the stripe on 20 total attempts.

At the end of the third quarter, Goshen led 39-32. Still a manageable deficit for the Bears.

Winter must’ve ended in the fourth quarter, because the Bears went on a rampage that fired up everyone wearing blue and yellow.

The half-court trap defense forced Goshen into a 10-second violation, a turnover out of bounds and a backcourt violation that all led to points for the Bears. Kendarius Perry hit a 3-pointer two minutes into the fourth quarter that tied the game 41-41.

“Once we started playing defense, getting traps and some easy baskets, I think that’s when the guys realized we can play and we’re alright,” Reeves said.

The newly awoken Bears were now in a tug-of-war with the Eagles going down the final stretch of regulation.

“Coach told us to stay in the game,” Perry said. “He told us we could get back in the game and to play good defense.”

Midway through the fourth quarter, Perry had to exit the game with a bloodied nose. But that didn’t keep him out of the game. He came back and still had the hot hand. He made three more 3-pointers with a tissue plugging up his bloody nostril for the rest of regulation. He led the team with 17 points.

“Once he gets in a groove and finds his shot,” Reeves said. “He’s a good shooter.”

Free throws continued to plague the Bears as the final seconds wound down. Jones had an opportunity to add some insurance points with 33 seconds left on the clock, but he missed the shot and Goshen drove down the court to make the layup to tie the game 53-53.

The defensive intensity carried over into overtime as both teams refused to give in. It was going to come down to free throws again for the Bears.

Somehow, a missed free throw by Perry turned into the play of the game for Keith. Ty’Quarius Murray leapt for the ball and called a timeout from the floor to keep the possession with Keith. The Bears had a 58-57 lead with just 37.8 seconds remaining.

The Bears missed their first shot off the inbound play, but center Justin McGuire scored on the putback to give the Bears a three point lead. Goshen was forced to foul as time was slipping away, and one more free throw by McGuire sealed the win.

“We fought hard,” Reeves said. “Nobody wants to go home. My guys never gave up. They kept fighting and it was emotional.”

The Bears advanced to the region finals on Thursday, Feb. 22 and will face Aliceville for a chance to move on to the Final Four in Birmingham.

“It feels good to get this win, because I want to play Aliceville,” Perry said. “They beat us two times, and I want to get back at them again.”

In the fourth quarter, when it counted most, the Keith High Lady Bears defense locked down the Southern Choctaw Lady... read more