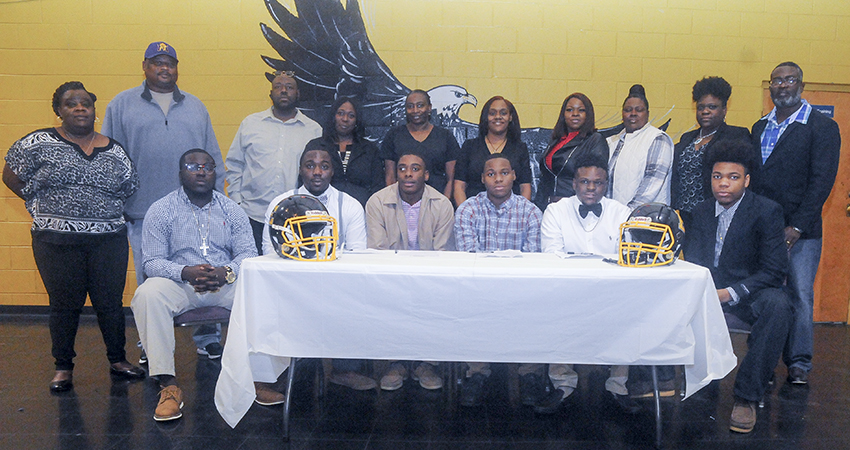 Malachi Washington, Katavious Olds, Ja’Derious Childs, Ja’Mel Phillips, John Newberry and Jermeir King signed their letters of intent in the ECA gymnasium surrounded by family members and in front of their fellow classmates.

The Eagles’ former football coach, Mike Stokes, returned to the school to assist his former players with their paperwork and congratulate them on their accomplishment.

“It means everything to me,” Stokes said. “All coaches want to win football games and state championships, but to me this is the biggest win you could have. Sending kids off to college to become young men and earn an education.”

The six seniors from Ellwood Christian have the unique opportunity to have played together in high school, graduate together and be teammates again at the collegiate level.

“That’s very rare,” Stokes said. “They all wanted to stay together. Every time we talked, they said they wanted to be in the same place. We were able to pull it off for them.”

The boys were excited to know that they were moving forward together. Phillips actually had another offer to play football, but changed his mind when he knew he had the chance to keep playing with his brothers from Ellwood.

“These boys here. I had to go through it with them,” he said. “I could’ve gone anywhere I wanted, but I wanted to go with them.”

Reaching the next level was a dream come true for a few of the players, and a surprise for others.

“It was pretty amazing because it happened at the last minute,” Childs said.  “I thank God for my scholarship. I’m thankful for my coach. He went out and put in the hard work to get us this scholarship, and I want to make the best of it.”

The Eagles ended their football season without a win, but their perseverance to stick with football through the practices and workouts speaks highly of their character, according to school principal Rev. Gary Crum.

“They’re hearts were in the right place,” he said. “As we teach them from a biblical perspective, the race is not given to the swift nor to the strong, but to the one who endures to the end. You don’t measure success by wins and losses, but whether I strap up my cleats and keep showing up.”