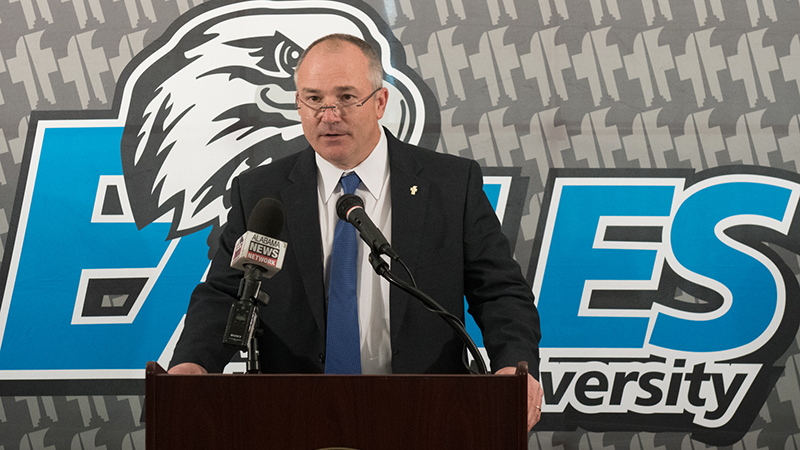 “I’m excited and honored to be here,” he said. “I think this is a wonderful university. It’s an awesome city and a great university, and I’m just proud that I’m a part of it.”

Wasden has been around football in Alabama for most of his life. He played wide receiver for the Auburn Tigers from 1987-1990 and won three SEC championships with the team.

He spent 11 seasons as a high school head football coach with a 91-34 career record. His final season with Eufala High School, Wasden’s team was 11-1 and ended the regular season ranked No.1 in Class 5A.

He coached the Trojans for 12 seasons from 2004-2015. The last 10 of those seasons, he served as the associate head coach and worked directly with wide receivers, tight ends and as the special teams coordinator.

Wasden’s predecessor, Charlie Boren, resigned this past December after six seasons as the Eagles head coach. In his final season, the Eagles finished with a 7-3 record and were 4-1 in conference games.

“I’m just really looking forward to being a part of the process of building this program with young men that want to come here and when they leave here they want to have a positive impact on their community,” Wasden said.

Wasden was officially introduced during a press conference this past Friday, and began his first day as the Eagles’ head coach. He addressed his new team for the first time on Sunday.

“That’s always an exciting time for both the new coach and players,” he said. “I told them who I was and laid out some expectations for them just so that everybody understands each other, and we’ll all be on the same page. [The players] seemed to be very excited themselves and very receptive.”

Faulkner University is a private, Christian liberal arts university in Montgomery, and is a match for Wasden’s values.

“I have had the pleasure of getting to know coach Wasden throughout this process and could not be more excited about what he will bring to the overall character of this program,” Faulkner’s vice president of student services Dr. Jean-Noel Thompson said in a university press release. “While his coaching credentials are highly impressive – it is his relentless commitment to forever shape the lives of young men through this special combination of faith and football that will make the real difference.”

Wasden’s Christ-based values are a result of what his parents Bobby and Wanda Wasden instilled in him while he was growing up in Selma. Shayne graduated from Meadowview Christian School in 1987.

“My dad was the head football coach and headmaster at Meadowview and my mom was a teacher, so it really started at home and that was a great place to continue the process,” he said. “There’s not many days that go by that I don’t think about something that happened during my time growing up in Selma, so Selma certainly has a huge influence on my life. Definitely the most impactful part of my life was spent in Selma, and it was a fun place to grow up in.”

Wasden is returning to the gridiron after taking a brief two-year hiatus from football. He’s excited to be back leading a football team and is looking forward to his first season as a head coach with the Eagles.