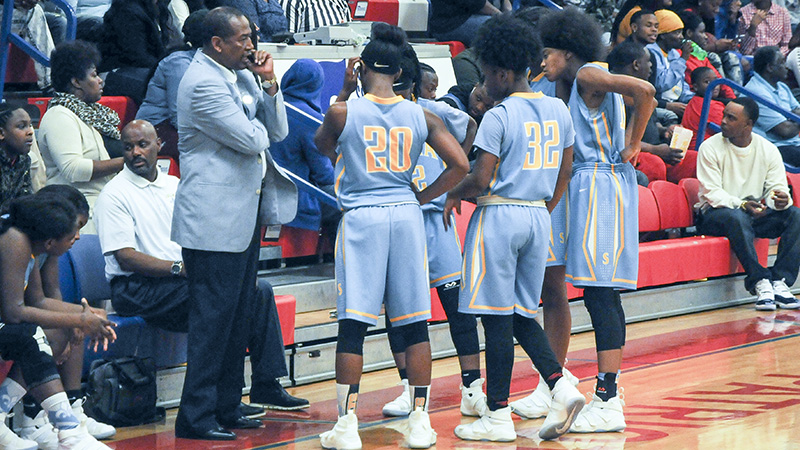 Selma High girls coach Anthony Harris talks strategy wiith his team during a time out at the Dallas County Schools Tournament. The Lady Saints are 15-4 this season and have two area games left to play.

Regular season high school basketball is winding down, and tournament play is on the horizon. The final few games of the schedule are packed with important games against area opponents that will decide the seeding in the upcoming area tournaments.

At this point in the season, three teams from Selma are ranked in the ASWA top 10 of their respective classes.

The Ellwood Christian Eagles boys team is 15-6 and No. 3 in the Class 1A rankings.

The Eagles, coached by Willie Shears, have been one of the top ranked 1A teams for weeks, but this is the highest the team has been all season.

The Eagles have four area games left against area opponents Isabella (2), Autaugaville and Maplesville this season. They are 2-0 in area play, but these last several games will decide their placement in the area tournament which is scheduled to start on February 5.

“I’m trying to go undefeated in the area,” Shears said. “That way I can host the area tournament at home.”

Loveless Craig and Justin Bufford have been the go-to players this season for the Eagles, and the team will continue to depend on them for points.

The Keith High School boys team is 12-6 and No. 8 in the Class 2A rankings. The Bears final area games are road matches against Marion and R.C. Hatch.  Keith started the season strong, but a few close losses interrupted their stride. The Bears is a balanced team that gets scoring from Arayvion Jones and Kendarius Perry on a nightly basis. The team is 2-2 in the area standings.

“Seeding makes a big difference in who you play, where you play and all of that,” Bears head coach Clifton Reeves said. “We’re just trying to stay focused and play out the scenarios that might happen.”

In the AISA, Morgan Academy Senators boys team is ranked No. 5 with an 11-3 record. The Senators are 4-0 in area play. Remaining on the schedule is Fort Dale and Hooper. Morgan Academy lost one of its top players in Gunnar Henderson early in the season, but the team has found ways to make up for losing their top-scorer. Jay Creech, Britton Adams and Dione Allen have helped fill in the points gap and kept the Senators on a roll.

The Senators are on pace to have the top seed in its region tournament, but the spot would be guaranteed if Hooper lost.

According to Morgan Academy coach Mark Knight, winning their bracket in the region tournament would set the Senators up with a first-round bye and place the team in the Elite Eight.

“That makes the Hooper game a little bigger,” he said.

The Selma High Lady Saints fell out of the top 10 in the Class 6A rankings, but are still a strong team with a 15-4 record. The Lady Saints split their season matchup with Chilton County, and the final two area games are both against Stanhope Elmore. Head coach Anthony Harris’ team seems to have a new leading scorer on any given night. Between Kynadra Lewis, Ta’Sharri Grimes and Rodreckia Parker, either of those three girls are capable of putting up double-digit points.

The area tournament is just weeks away. Even though these top teams are primed for a solid playoff run, the girls and boys teams from the other local schools will also have their say in their respective area tournaments as well.