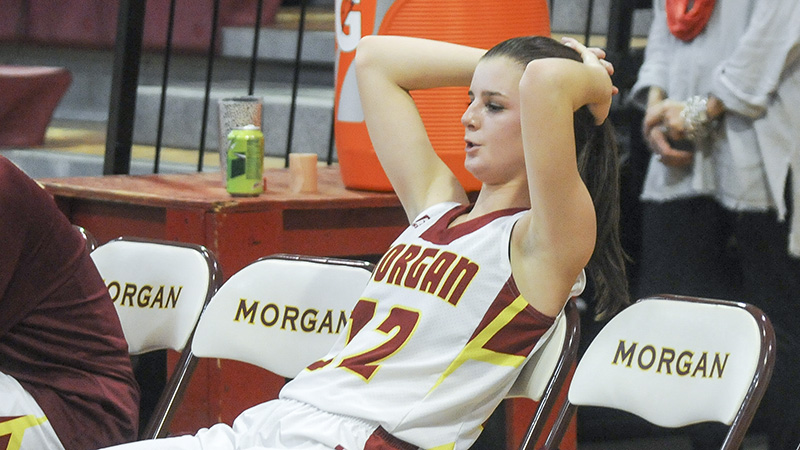 Morgan Academy’s Abigail Lane resting on the bench after scoring a career-high 22 points against Monroe Academy this past Thursday. Morgan, along with the other local high schools, had their Tuesday games cancelled due to a winter weather warning.

The threat of poor weather conditions on Tuesday night forced all of the local high schools to close, and subsequently postponed the basketball games scheduled that evening.

The National Weather Service’s forecast on Monday night updated Dallas County from an elevated impact area to a significant impact area. Nathan Owen, a meteorologist with the NWS in Birmingham, told the Times-Journal that the window of snowfall would be from 4 p.m. to 6 or 7 p.m. on Tuesday evening.

The games Tuesday night were scheduled to start as early as 4 p.m.

However, since the boys games usually don’t finish until around 9:30 or later, the road conditions could have worsened by the time the away teams returned to their buses.

Meadowview and Morgan Academy were the only two schools with home games, while the other five local schools would’ve been away.

Even though there are only a few games remaining on each teams regular season schedule, the cancellation of Tuesday night’s games impacted each team differently.

Morgan Academy for example, was scheduled to play area opponent Fort Dale at home. The boys team is 4-0 in area play this season.

The only two games remaining on Morgan’s schedule is the make-up game against Fort Dale and the area game against Hooper on Friday, Jan. 19.

“Actually, the Hooper game on Friday will decide our region,” Knight said. “I don’t think [the Fort Dale game] will have any effect on the No.1 seed.”

The delay in play actually works in favor of teams like Keith and Southside High School.

According to Keith head coach Clifton Reeves, it gives his team an opportunity to focus on its remaining area games.

“It kind of helps in the sense that today wasn’t a real big game for us, but it gives us more time to get ready for and focus on Friday, which is an area game,” Reeves said.

Southside girls coach Rand Smith said that the postponement of games allows his team more time to prepare for their final stretch of games.

“It’s going to give us a chance to have this game postponed and have a little more practice between now and our next [game],” Smith said. “It might actually help us out a little bit.”

On the other hand, the re-scheduling will make things a bit tight for the Saints of Selma High. Instead of having two-days rest before playing Southside at home on Friday, the Saints will have to travel to Stanhope Elmore for the area make-up game on the night before.

“It kind of jam packs our schedule,” Selma boys head coach Ronald Lane said. “It just kind of throws your schedule out of whack, and you have to make arrangements with the weather be the way it is. Sometimes it can throw you off when the schedule is not laid out as it had been planned.”

The concern for the safe transportation of the kids through potentially dangerous conditions at night was not a risk worth taking.

“We weren’t sure about the road conditions and the safety of the kids traveling back-and-forth,” Knight said.

Even though some coaches waited until school closing were confirmed, they agreed it was the right call to avoid the risk.

“You always want to err on the side of caution, because you can’t ever say what would or won’t happen,” Reeves said. “You don’t want anything to happen to the players, parents or anybody traveling to the game.”