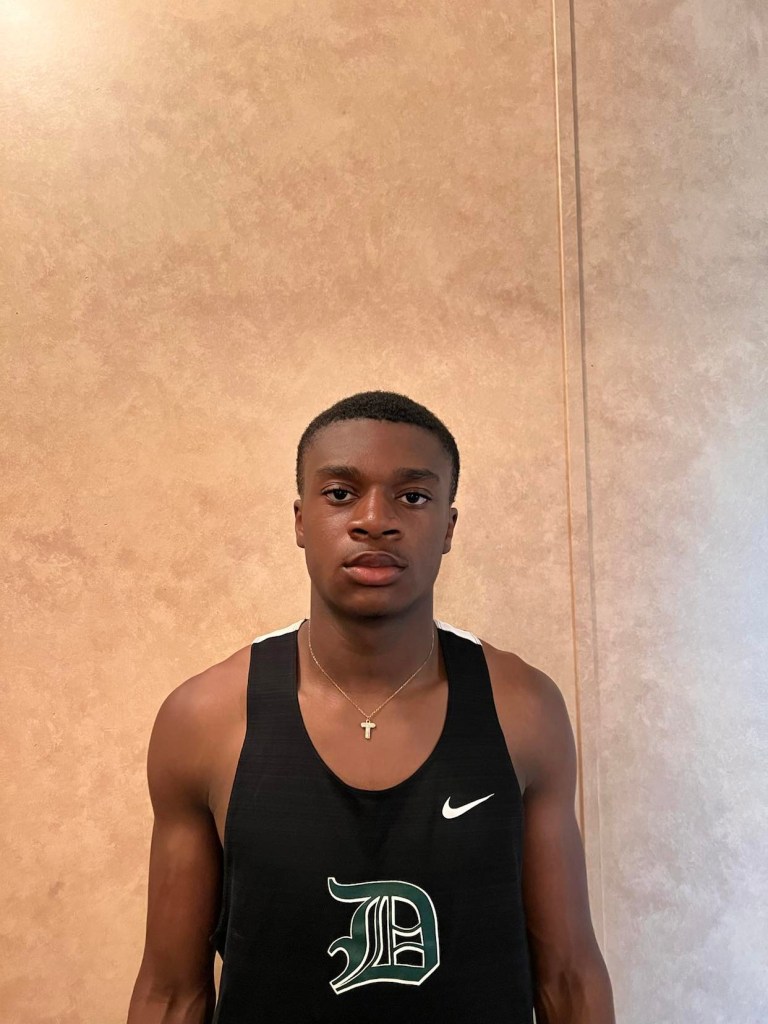 “He really is a great athlete,” said David Hobson, the Hornets track and field coach. “He’s played basketball the majority of his career. This year, he decided he wanted to run track and has actually been a huge asset to what we’ve been doing, especially this past week. This Saturday, it being his second meet as opposed to his first meet, it was almost like a whole new person. He was extremely confident in what he was doing. He went out, set a goal and met those goals.”

Sullivan also anchored the relay team and helped them finish third in the 4×100-meter with a time of 49.76.

Before Sullivan even lined up to race, he said he prayed.

“I have a necklace around my neck, which is my good luck charm,” he said. “I grabbed it, and I said a prayer. Then, I just really pushed myself all the way to the finish line.”

While he is relatively new to the sport, Sullivan said he finds the sport to be gratifying.

“I enjoy the running because ever since I was a child, that’s all I’ve loved to do was run,” he said.

Sullivan said one of his favorite athletes is Atlanta Falcons wide receiver Calvin Ridley, mainly for the way Ridley played in college at Alabama.

“I look to him because he was humble,” Sullivan said. “He never showboated, and he was just really that athlete that everybody looked to when they needed a win or needed someone to pull through.”

He added he tries to set an example for his younger teammates by giving them motivation and telling them that if they’re out there competing, they’re there for a reason.

“They have purpose, they have motivation and they have the strength to do it,” Sullivan said. “If I can do it, they can do it. We’re no different, really. Everybody’s the same.”

Sullivan said before a meet or game, he prefers to listen to R&B music because its subtle and helps him ease his mind. In his spare time, he enjoys going out to play basketball.

In the classroom, Sullivan said his favorite subject is math, taught by his favorite teacher, Coach Alec Pitts.

“He makes it easy,” Sullivan said. “He describes everything to you and breaks it down. That’s why I love math. I’ve always been good with numbers since I was a kid.”

Sullivan said his go-to when it comes to places to eat in Selma and Dallas County is Church’s Chicken.

“Ever since I was little, I’ve always ate chicken from there,” he said. “It’s close to how my mom makes it when she cooks.”