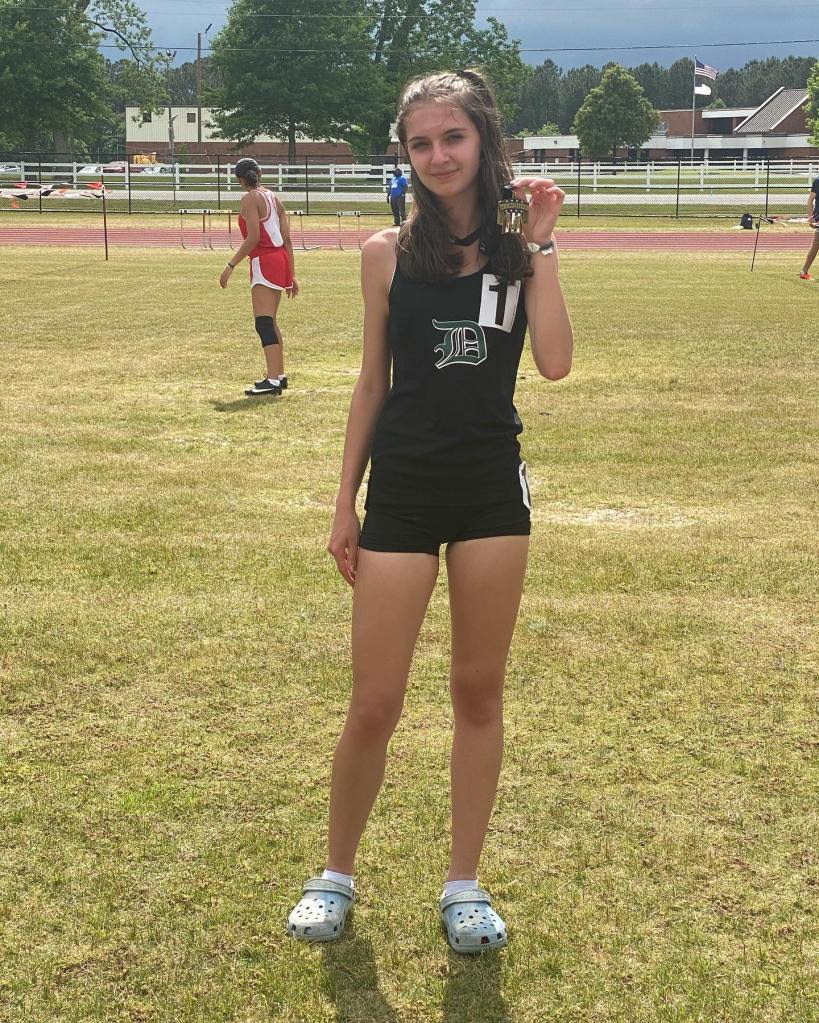 Dallas County High School sophomore Courtney Farmer claimed a gold medal in the 800-meter run with a time of 2:47.09 in a Class 4A sectional track meet held at T.R. Miller on Friday and Saturday.

Her performance earned her Times-Journal Athlete of the Week honors.

“It felt amazing being able to go back this year and win first place, actually make it to state and actually improve by that much this year,” she said. “When I crossed the finish line, my heart dropped because I knew my time was really good. I just stood there and I started crying because it was a really surreal moment for me, realizing that I finally did it, that I made it to state.”

Dallas County boys and girls track coach David Hobson said Farmer has been an integral part of the program since the school brought back track and field a season ago.

“When it got out that we were bringing it back, she was one of the first ones to sign up,” Hobson said. “She’s been here since Day One.”

Hobson said Farmer’s time in the event marked a 10-second improvement from a season ago when she fell short of qualifying for state.

He added Farmer shows her leadership by being supportive and encouraging of her teammates and doing what’s needed when she’s asked to step up to the challenge.

Farmer said she’s enjoyed running ever since she was younger and when the track team was reformed in her freshman year, she was eager to be part of the team.

“I really like to run,” she said. “It’s one thing that I was just good at. Even though I played other sports and stuff, I didn’t really enjoy them as much as I enjoyed track. I really actually love track way more than I’ve loved any other sport.”

She added she sets an example for her teammates by doing whatever it takes to make the track team successful.

Farmer aspires to continue her track career beyond high school.

“I hope I can get a scholarship, maybe, or just get an opportunity to run at the college level,” she said.

“She’s really sweet and she’s open-minded to everybody and everything,” Farmer said.

When she’s not in school, on the track or at work, Farmer said she enjoys drawing, painting and cooking.

Farmer said her favorite place to eat in Selma and Dallas County is Taco Bell.

• Morgan Academy’s John Allen Ingram went 3-for-4 at the plate, all doubles, with 3 RBIs for the Senators in Game 2 of a second-round Alabama Independent Schools Association playoff series with Springwood on Thursday. Two of his hits came in the fifth inning during a nine-run scoring surge.

• At a Class 5A sectional track meet in Beauregard, Selma High School ninth-grader Jayla Brown qualified for the state track meet in the 200-meter dash with a time of 27:47 and helped the 4×400 relay team qualify for state with a time of 4:27.66. Her teammate on the girls track and field team, Makiyah Jones, qualified for state in the long jump with a distance of 14-05.